The Brittany Spaniel: A Sweet and Versatile Breed

The Brittany spaniel is a member of the gun dog group, and was originally bred for hunting birds. Today, we'll take a look at this breed in more detail. 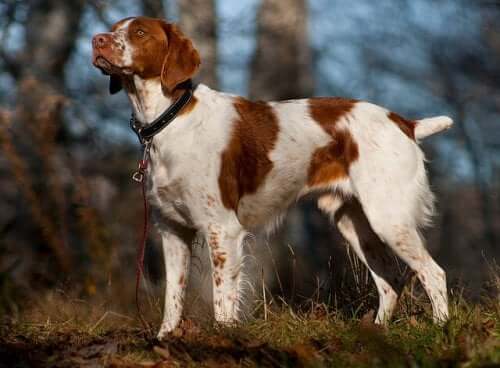 The Brittany Spaniel is one of the most popular hunting dogs in the world. At the same time, their sweet and affectionate nature also makes them ideal family pets. Intelligent and energetic, they never miss an opportunity to be the center of attention. If you want to share your life with one of these incredible dogs, we’ll tell you everything you need to know.

The history of the Brittany Spaniel

You can learn a lot about the origins of the Brittany Spaniel from its name. The word “spaniel” is a reference to a specific type of dog that was first developed by Spanish hunters. “Brittany” tells you exactly where this particular type of spaniel was bred: Brittany, in northern France.

At this point, we should also point out that both the Cocker and the Clumber spaniel share the same ancestor as the Brittany spaniel. This common ancestor was selectively bred to create several new breeds, each of which was developed with a different purpose in mind.

The Brittany Spaniel is a gun dog, and the most popular hunting dog in France. It’s believed to be one of the oldest types of spaniel and, by the beginning of the 20th Century, the first breed standards had already been defined.

The Brittany Spaniel is a medium-sized dog. There is no real difference in size between males and females, as they typically weigh and measure around the same: between 18 and 20 inches in height at the shoulders, and weighing approximately 33 – 40 lbs. This makes them one of the smallest gun dog breeds.

In terms of appearance, the Brittany is a compact, and well-proportioned breed. They’re fairly robust, without being too heavy. Active, agile and light on their feet, they have an intelligent expression and always seem to be bright and alert. Their long, graceful legs give them an agile and determined gait.

Their heads are similar to that of a German short-haired pointer, although in this case the skull is slightly longer than the nose. Neither the body nor the legs are any longer or shorter than usual, giving them a square, compact physique. They have large noses, which vary in color depending on their coat.

Their ears are triangular, and wide rather than short. They tend to flop down over the head, and never stop moving while they’re out on a hunt.

Some spaniels are born with naturally short tails, while others have slightly longer tails. In many countries, it’s now illegal to dock dogs’ tails if they’re thought to be too long. In the past, however, breeders would cut their dogs’ tails down to around 1 inch in length.

Their coats are relatively sparse, and can be smooth or slightly wavy. The fur on the head and back is short and velvety, while the fur on the tail, legs and stomach is long and feathery.

The coat color can vary greatly from one individual to the next. The most common are orange and white, black and white, and brown and white. Accepted coat markings include spots, roan, and ticked patterns.

Some Brittanys may even have a tricolored coat, or the so-called ‘orange belton’ coat variety, similar to that seen in English Setters and other hunting dogs.

The Brittany Spaniel is an extremely versatile breed. They’re highly-skilled pointers and gun dogs, and are one of the most popular breeds for hunters all over the world. However, when hunters realized what great temperaments they had, more and more people started keeping them as pets.

Brittanys are characterized by their great intelligence. Attentive and eager to learn, they’re very easy to train. It’s important to emphasize that punishments and scoldings will only slow down their learning. Positive reinforcement is the best way to get good results. With patience and time, these dogs will do almost anything you ask of them.

Brittany Spaniels are full of energy, and need long walks on a daily basis. Like any hunting breed, it’s important to encourage them to use their incredible sense of smell. They enjoy problem solving and scent games more than anything else.

They’re extremely sweet-natured, docile and affectionate animals, forming strong attachments to their owners. They’re always happy to have cuddles and attention, making them a fantastic choice for families with children or elderly relatives. They instinctively know when to be more careful and less boisterous around more vulnerable family members.

However, it’s important to remember that Brittanys are naturally outgoing creatures, and will accept attention from pretty much anyone. As such, they’re not the best choice if you’re looking for a guard dog to protect your property, as they’ll try to make friends with any strangers they cross paths with.

Brittany Spaniels are generally a fairly healthy breed, and don’t really suffer from any genetic defects. However, it’s important to book them in for any check-ups that your vet should recommend, and be sure to keep them up to date on vaccinations and de-worming treatments.

Like any breed that spends a lot of time running through undergrowth and over rough terrain, it’s important to keep a close eye on the state of their ears and paws. You’ll also need to keep a lookout for ticks and any other parasites that may target your dog, as well as splinters and thorns that may get embedded in the skin and cause infections.

Because Breton Spaniels have very fine coats, it’s important to choose a good quality brush, and groom them on a daily basis to remove any loose hair and prevent skin problems.

The Brittany: A Friendly and Loyal Breed
The Brittany is a popular working breed, known for its great athleticism and stamina. We'll tell you all about it in this article. Read more »
Link copied!
Interesting Articles
Cats
What's the Origin of the Persian Cat?