Do Dogs Go Through Menopause?

Females are especially sensitive during heat, as they need plenty of attention. It’s advisable to sterilize them when they’re older, as they can die if they get pregnant. 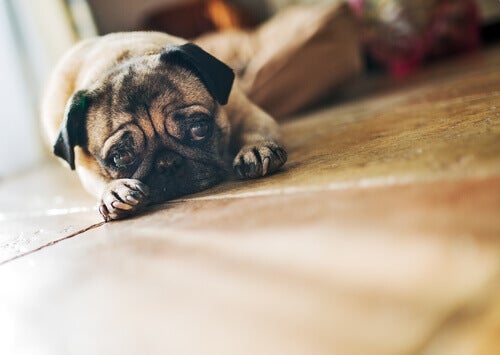 Given that the reproductive cycle of dogs is very similar to that of humans, there are many who wonder whether dogs go through menopause. Well, today we’re going to analyze this question and dispel all doubts surrounding it.

Female dogs don’t ovulate the same way women do. Therefore, what happens to them can’t be called menstruation, but heat. This happens twice a year –in some breeds, only once a year– and the expulsion of blood is mainly due to an increase in the blood flow.

So, do female dogs get menopause or not?

As female dogs don’t have a menstrual cycle strictly speaking, they don’t get menopause either. A female dog will experience periods of heat throughout its life, until its death. Therefore, even if the female dog is old, it’d still be bleeding when in heat.

This situation can endanger the animal’s life, because an adult dog could die if it gets pregnant. How can we avoid this? Through sterilization.

Even if some people aren’t in favor of this, there are times when spaying and neutering a pet can be beneficial to them. This is one of those cases. If you spay your dog when it’s older, it’ll stop going into heat. Consequently, it won’t be at risk of unhealthy pregnancies.

Caring for a dog in heat

While you’re deciding whether or not to have your female dog spayed before it’s too old, here are some details to keep in mind when it’s in heat.

Take care of its hygiene

Despite the myth that you can’t bathe a dog in heat, this is far from true. A dog in heat needs hygiene even more than when it’s not in heat. So, don’t be afraid to bathe it and help it cool down, as long as you use warm water.

Keep it away from male dogs

When the female is in heat, it releases pheromones that attract males, so males will try to get close to your female dog and jump on it. If you don’t want to have puppies, it’s better to keep your dog at home.

Give it a quiet space

Look for a place where it can sleep as much as it wants. Keep it away from the usual home noises as they could be annoying to it during this period.

As seen, female dogs don’t go through menopause. Even though estrous is different from menstruation, they still require the care and petting that only you can give them.