The existence of canine empathy towards their owner isn't merely speculative, as studies have irrefutably determined that dogs can be infected by their guardian's stress. 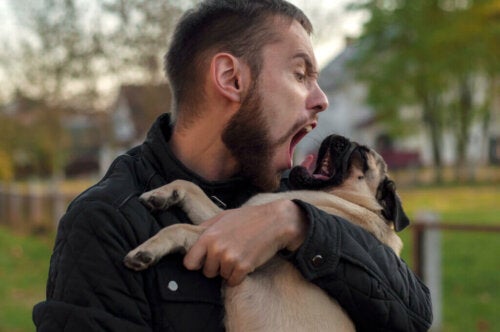 We’ve all suspected that dogs perceive their guardians’ stress and other emotions. Any dog owner will claim that their pet knows when they’re happy or sad. Sound and facial expressions are a universal language, so this interspecific communication isn’t entirely surprising.

What may indeed be fascinating is to know that, besides perceiving their guardians’ emotional states, dogs are infected by them and generate physiological responses according to the situation.

About stress and its hormonal foundations

Stress is a feeling of physical or emotional tension. It’s necessary to distinguish two types: chronic and acute:

This feeling has a hormonal basis, as it’s clearly associated with the release of adrenaline and cortisol.

The first hormone increases heart rate and blood pressure. The second improves the use of glucose in the brain, increases the availability of tissue-repairing substances, alters the immune system responses, and suppresses the correct digestive function.

All these physiological mechanisms —among many others— have a clear function: to redirect resources in order to prioritize fight or flight responses in the individual. But how do these aspects relate to the behavior of a dog and its guardian?

A study in Nature journal tried to elucidate the relationship between domestic dogs’ stress with respect to their owners’ emotional state. To this end, the study entailed the following steps:

As incredible as it may seem, the levels of this hormone in dogs weren’t conditioned by their physical activity, but by their guardians’ emotional state.

Neurotic, nervous, and suspicious guardians had higher levels of stress. This translated into a higher concentration of cortisol in their canine pet. This is evidence that dogs, besides detecting people’s emotions, make them their own.

This phenomenon is known as “emotional contagion”. This responds to a mechanism which generates empathy and shared emotions between two or more individuals, either explicitly or implicitly.

We must remember that the human being is the central element of the dog’s life. Hence, the dog is much more influenced by its guardian than vice versa. After all, people have other social circles beyond home, while dogs only have us.

Beyond the facial expression

We can go even further, as various sources state that dogs are capable of “smelling” the hormonal changes in humans. This would explain why they modify their behavior, for example, when they meet a pregnant woman.

Besides recognizing our facial expressions, these animals can perceive changes in hormone levels such as oxytocin, serotonin and dopamine —substances produced during happy events. Therefore, dogs can unambiguously interpret their guardians’ emotional state.

As we’ve been able to see, we no longer move in the terrain of speculation when talking about dog empathy. Experiments have shown that dogs are indeed capable of perceiving their owners’ emotions far beyond their facial expressions. Moreover, these emotions infect them.

Therefore, we mustn’t forget that dogs are family members that require consideration. If we avoid screaming in front of a small child, why is it normal to do so in the presence of the pet?

The Unique Training of Guide Dogs
There are some dogs that go above and beyond the call of duty. Today, we'll look at the training of guide dogs for the blind and visually impaired. Read more »
Link copied!
Interesting Articles
Mental Health
What Are Animal-Assisted Therapy Strategies?