Should You Trim Your Cat's Claws?

Is it possible to cut your cat's claws without getting scratched to pieces by a very angry feline? In this article, we'll answer this question, and give you some practical solutions. 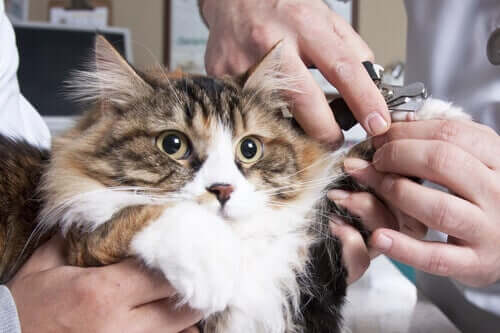 Many cat owners ask themselves whether they should cut their cat’s claws. A cat’s nails grow constantly. Thanks to their flexor tendons, these claws are also retractable, and are only visible when extended. As a result, they don’t wear down naturally.

The anatomy of your cat’s claws

A cat’s claws are formed of two parts: the first is the nail itself, which is made up of layers of keratin. The second is the nail bed, which contains the nerves and blood vessels. Cats have five toes on their front feet, and four on their back feet. The fifth toe allows cats to climb.

How cats use their claws

A cat uses its claws in almost everything it does during its waking hours. For example, when they use their scratching post, it gives them a burst of energy, and tones the upper half of their body.

When they play, cats hook their claws into toys as they fly through the air so as to hold them still. When they run around the house or climb the stairs, they use their claws like studs, giving them extra traction.

They use their claws like miniature crampons when they climb their play towers or trees, allowing them to reach the top more easily. Cats also use their claws to scratch themselves, move their food, hold onto a narrow walkway (such as a fence) or grab hold of a surface to give them greater stability when grooming.

A cat that scratches is a happy cat

Cats scratch their scratching post to relieve stress, mark their territory, and exercise their muscles. Their claws are at the center of it all. The physical exertion, visual impact, noise, and the smell associated with scratching are all-powerful stress relievers for our feline friends.

Cats even use their claws to express how they’re feeling. For example, a slight extension of the claws is a subtle way of saying, “I’m tired of being hugged and would like you to put me down”.

In some circumstances, claws are life-savers, allowing cats to climb to safety and evade an attacker. For all these reasons, surgically removing a cat’s claws is considered illegal in many countries, or is effectively banned.

What is the best scratching post for your cat?

Cats have their own very specific requirements when it comes to the perfect scratching post. Firstly, the post should be located close to where they sleep, as the majority of cats mark their territory close to their sleeping area.

The post should also be located somewhere prominent, as there’s no point in them marking their territory if it won’t be noticed by other cats.

Furthermore, the post should be covered in a rough material that allows the animal to dig in its claws and have a good scratch.

And finally, the scratching post should be taller than the cat when it stands on its back legs, and stable enough that it won’t fall over when used.

Why should you cut your cat’s claws regularly?

If you’re not sure whether or not you need to trim your cat’s claws, it’s usually okay to leave them, unless they’re obviously too long and run the risk of growing into the foot or causing other problems for your pet.

However, if cutting your cat’s claws is too traumatic (for you and your pet) you can simply trim the ends so that they’re a little less sharp. If you’re in any doubt, be sure to discuss it with your vet.

6 Fascinating Facts About your Cat’s Paws
Cute, squishy and incredibly soft, a cat's paws are one of its most remarkable features. Today, we want to tell you some facts about your cat's paws. Read more »
Link copied!
Interesting Articles
Care and Well-being
Is Wearing Clothes Comfortable for Dogs?