The Science Behind the Well-Being of Domestic Cats

It's hard to tell our pet's mood at times. So today we're going to give you some tips on how to improve the well-being of domestic cats. 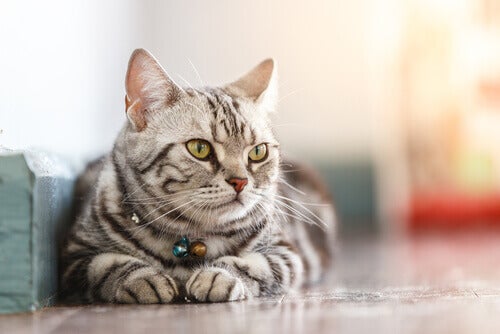 The well-being of domestic cats is often taken for granted unless they have symptoms of serious illness. This is because minor emotional imbalances are often hard to identify. It’s also because owners lead busy lives.

The stimuli they’re constantly exposed to, as well as all their daily concerns, make it even harder to worry too much about an animal. Do you ever wonder what things can make a cat happy or unhappy? Continue reading to find out.

We’re not absolutely certain about the beginning of the interaction between cats and humans. The common belief is that this symbiotic relationship began in Ancient Egypt. However, recent fossil evidence indicates it may have begun way earlier — about 7000 years ago. People have loved and feared cats ever since.

Currently, cats are mainly pets. Estimates indicate that millions of them currently reside in households all over the world. Due to their social and individual importance, these animals have are one more member of the family. As such, they receive attention, understanding, and empathy from their guardians.

Today we’re going to tell you about various factors that can determine the well-being of a domestic cat to a certain extent. We’ll do so based on a study published on ScienceDirect.

The study mentioned above set the objective of exploring different factors when quantifying a feline’s well-being. The methodology was as follows:

The average profile of a participant was slightly biased, as most were female employees with previous experience in caring for cats. The results are still rather interesting though.

The well-being of domestic cats depends upon these factors

The data is both curious and positive, but note that only 16% of domestic cats didn’t show any abnormal behavior for their species. This means that, although the owners paid a lot of attention to the animal, they couldn’t fully meet their needs. OK, so what promotes the well-being of a domestic cat, then?

Cats looked after by several people seem to receive more veterinary care. This underlines the importance of all members of a family feeling responsible for the animal and providing them with the best possible care.

The cats belonging to people who had previously owned a cat had fewer behavioral problems — such as tearing objects apart. This could be because more experienced owners know the kind of stimuli that an animal requires. It never hurts to mention that scratching posts and toys are essential for a cat’s mental condition.

Furthermore, defecation outside the litter box can be a sign of a stressed animal. The results are surprising, as these behaviors were drastically lower in cats from a childless family.

Again, this highlights the need to properly teach our children to have the utmost respect for all living beings. Especially for the pets in their household.

These results don’t mean that an animal will suffer more if there are children at home or if their owners have no previous experience with pets, or even if they only have one owner.

What this type of study shows is the need to understand the greatest weaknesses and deficiencies in an animal’s environment. So, if you’re a cat owner, pay special attention to them and try to fix any problems.

For example, if you have children at home, focus your time and energy on teaching them to respect the animal. They shouldn’t handle it roughly or be too noisy around them.

Domestic Cats: Highly Independent Animals
Any cat owner will tell you that our feline friends are very independent animals. In this article, we'll tell you all about it. Read more »
Link copied!
Interesting Articles
Oral Hygiene
Tartar in Dogs: 6 Consequences

If you love water activities, you’d probably like to swim with your dog. However, your dog may or may not…