It’s very common during these dates to observe different animals related to the Bible. These have a great symbolic relevance in the Bible. 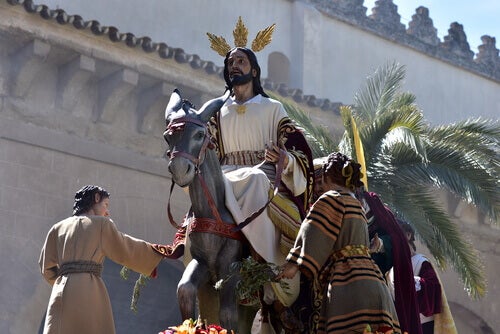 As God’s creatures, references to animals were never going to be missing from the Bible. In Genesis, the fifth and sixth days of creation refer to God creating air, sea, and land animals. This is a proper occasion to remember the animals related to the Holy Week and their symbolism in Christianity.

Animals related to the Holy Week

The snake. This reptile is the animal considered most impure in the sacred scriptures. The best-known event where it appears is the temptation of Adam and Eve in the Garden of Eden. The serpent incited the couple to know the tree of the knowledge of good and evil, a sin that brought about their expulsion from paradise.

The donkey. Also called an ass, it was the means of transportation for those who didn’t own a horse. The most memorable episode in the Bible where it’s mentioned is the entrance of Jesus in Jerusalem riding a donkey.

The locust. This highly destructive insect is one of the animals that appears most often in the Bible. The best-known event is when God sent the ten plagues to Egypt. One of them was a plague of locusts that devastated the crops and caused famine.

The lion. This is another animal related to the Holy Week. This large feline represents Yahweh (God) due to its extreme power and strength. It’s present in several texts of the Bible, including references in the Book of Revelation.

The ant. This arthropod insect appears in some verses of the Bible as an example of work, foresight, and wisdom. Solomon contrasts its qualities to human laziness.

These are only some of the animals related to Holy Week because of their appearance in the Bible. The calf, the ram, and the horse could also be mentioned due to their symbolic relevance.

Tips for traveling with your pet during Holy Week

The pet is a member of the family. Therefore, a family pleasure trip should include it, unless it’s inappropriate for its own sake.

If you’re going to go for a trip during Holy Week, then you must make the necessary arrangements so that your pet enjoys the trip avoiding any danger or inconvenience that could affect it.

Below, we’re going to remind you of the preparations and care necessary to ensure a nice journey with your pet.

Before traveling with your pet

Preparations are important in order to meet your pet’s needs and demands, to ensure that the trip is a pleasant one for everyone. We suggest that you make a list of what’s needed, including, but not limited to, the following items:

During the trip with your pet

These are just a few recommendations for traveling with your pet during Holy Week. However, it all depends on the type of animal involved. In any case, one of the most important recommendations is to never skimp on the love and attention given to your family member.

Should I Take My Pet to My Wedding?
Do you think it's right to take your pet to a wedding? Some people even dress them in a suit! We'll take a look at the matter in detail. Read more »
Link copied!
Interesting Articles
Tips
What Are the Benefits of the Sun For Pets?