Tips to Help Your Dog Get Used to Being Alone

Dogs are social animals and need to be in contact with others. While this does not mean that they can never be left alone, it is necessary to put into practice a series of habits to prevent them from suffering stress. 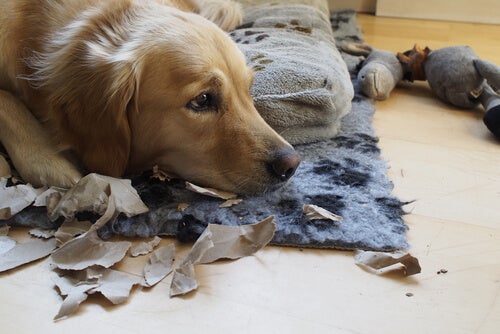 One of the main fears that people have when adopting a pet is what to do with them when they go to work or go shopping. Many people decide not to bring an animal home, to prevent him from crying or breaking everything. Therefore, in the following article we give you some tips to help your dog get used to being alone.

Some animals spend many hours alone at home and suffer what is known as separation anxiety. When they have no company they might cry, howl, do their business all over the place, or break whatever is within reach.

Remember: dogs are social animals, and that they need to be in contact with other beings. This is not to say that you should always stay at home to prevent the dog from feeling sad. Instead, take some precautions and change certain habits:

1. Begin when he is a puppy

As soon as the dog enters your home, you have to teach him to stay alone. At first, it will be for a brief lapse of time. Then it will be for longer periods – several hours, even. Gradually, he will see it as something normal.

Many people adopt an animal when on vacation. They do it to take advantage of those days of leisure and to help their pet gradually get used to the fact that their owner will not always be around.

2. Make sure he gets exercise

Lack of physical activity can affect your pet’s mood. So if you take him for a walk before you head to the office, your dog can get some rest while you’re gone. Get up half an hour earlier. Then, take him to the park or for a walk around the block.

The important thing is that he spends a good part of the energy that he has recharged during the night. That way he’ll be calm for at least a few hours while he rests after the morning’s exercise.

Another way to help a dog get used to staying alone is to pay attention to your own habits: if you get up 10 minutes before the time you need to leave,  you will probably rush while you dress and gather your things. On the other hand, if you have more time available and you act calmly, your pet will associate your leaving with something pleasurable.

In addition, we recommend that you do not interact with the animal in the 15 minutes before your departure, so that he calms down and anticipates his alone time. If you play with him, pamper him or talk to him, it will be harder for him to accept that you are leaving.

At the same time, do not say goodbye in an exaggerated way, as if it were the last time you will see him. Animals see that as something negative, and their emotional state suffers. Don’t feel bad about not saying goodbye before you close the door.

4. Leave him food and toys

When you leave home, we advise you to give your dog some food, so that he will be entertained and will lie down to rest to digest his food. It is also a good idea to leave some toys or favorite objects for him to chew and keep himself entertained for several hours.

5. Tidy up the house and play music

Try not to leave any objects within reach, so that your dog will not break or destroy anything in your absence. Avoid leaving clothes lying on the floor and leaving balcony and room doors open.  Close the access to the pool if you leave him in your backyard, and any other place that you consider dangerous.

To prevent the animal from feeling lonely and sad, you can leave the radio or TV on. Of course he won’t understand what they’re saying, but at least the house won’t be totally silent.

Finally, you can choose to leave him in a small room, without access to other spaces in the house. For example: the kitchen. He should have all of his personal objects with him. This includes bed, toys, food dish and drinking dish. And never tie him up. Allow him to move about freely, but close off the  places that you do not want him to enter.

Link copied!
Interesting Articles
Tips
What Are the Benefits of the Sun For Pets?