What to Do When Your Dog is Gagging 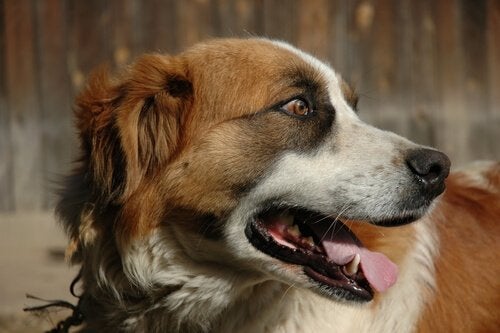 It’s not uncommon to be sitting quietly on the couch, when suddenly, your dog starts gagging. You might panic because you are thinking he can’t breathe, he’s trying to vomit and it could be something worse. In this article, you can find out how to differentiate gagging from other symptoms, learn why dogs gag, and how to help your pet.

Gagging is caused by a stomach contraction. When this happens, the stomach reacts by getting rid of the substance that the animal’s body rejects through vomiting.

Why do dogs gag?

Gagging is an attempt to vomit with nothing coming out.  At the same time, a dog may vomit without gagging. The reasons why your dog might gag are the following:

When gagging is accompanied by vomiting, it may be more severe. Sometimes it can be a sign of internal damage that needs medical attention.

How to tell the difference between gagging and coughing

Gagging and coughing are very similar, so you’ll need to know the difference to help your dog. Sometimes the foam that a dog spits up is from coughing, and not from vomiting.

One of the easiest ways to tell the difference is by the sounds the dog makes. Coughing makes a hoarse, dry sound. Meanwhile, gagging produces a sound that originates from the throat with  saliva.

It is also important to know how to differentiate gagging from regurgitation. Although both are ways of expelling something from the stomach, regurgitation doesn’t involve gagging and abrupt abdominal movements.

What to do when your dog is gagging

Once you know what is causing it and how to differentiate gagging from other symptoms, then you can take action and attend to your pet.  As mentioned above, gagging accompanied by vomiting is the most dangerous, so we will focus on that.

If you think the gagging is caused by your dog swallowing an object, you’ve got an even better reason to go to a specialist. Sometimes a vet will have to do things that you can’t do at home.

Keep a close eye on your dog, because if he has gastric dilatation volvulus (GDV), also known as “dog bloat”, it could lead to death. Don’t assume that gagging is harmless. Anything out of the ordinary that happens in our bodies, including your pet’s body, is because something is wrong. You are responsible for finding out what the problem really is.

Most dog owners worry when their dog has a dry nose. When they see it, they wonder if it means there’s something wrong with their health. However, there are many…

Sadly, just like with humans, obesity in dogs is becoming increasingly common. But the good news is that you can help an obese dog to get healthier through exercise and…

What is "microbiota"? Both humans and dogs have it on their skin, nose, mouth, and intestines. Intestinal microbiota in dogs is an ecosystem of bacteria, fungi, and certain viruses. This…