Why You Should Never Leave Your Dog in the Car

Regardless of the time of year, you should never leave your dog alone in the car. This is especially true in the summer, and we'll tell you why. 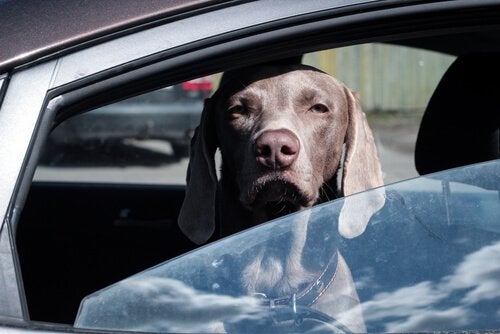 We hate having to leave our pets at home when we have to go and run errands or go shopping. So, we often decide to bring them with us. However, not all places are pet-friendly and so you have to leave your dog in the car. We’ll be showing you why you certainly shouldn’t be doing this!

You should never leave your dog in the car when you go and run errands. This goes for any time of the year, but it’s especially true in the summer months. In this article, we’ll tell you why.

You should never leave your dog in the car

In the summer months, the temperature rises and can sometimes reach extremes. If your dog is locked in the car, he’ll be very uncomfortable and could even suffer heat stroke. In extreme cases, he could even die.

To give you an idea of how this feels, imagine sitting in a car in direct sunlight without air conditioning for half an hour. Researchers have even done tests on people to stay in cars like this for ten minutes. Although they were paid a hundred dollars to do it, none of them were able to. So, why do you think your dog could handle it?

Cars accumulate so much heat inside of them that they can feel like an oven. And that amount of heat could actually kill your pet.

Even though the people who took part in this experiment suffered a lot, animals like dogs suffer even more. Why? Because they don’t sweat.

Anyone exposed to extreme heat will start to sweat like crazy. Why is that? Sweat acts as a kind of thermostat that manages the body’s temperature. It can help to reduce your temperature and bring it down to a normal level. This is a defense mechanism that the body will activate on its own accord when it’s in danger.

Animals, especially dogs, don’t have the same number of sweat glands that we do. The only mechanism their body can use to deal with extreme heat is panting. However, this will then hinder the dog’s breathing and he may suffocate.

Additionally, dogs already have a higher body temperature than humans to begin with, so it will rise faster anyway.

What should you do if you see a dog locked in a car?

Let’s say that this article has made you aware that you should never leave your dog in the car. You’ve decided it’s best to just leave him at home and have him happily greet you once you’ve returned home. This is a safer decision than taking him with you and risking his life.

However, there are still other people who continue to do this, and you may come across a situation where you see a dog locked in a car one day. In fact, there are lots of videos online that show the police rescuing dogs trapped in cars.

To save them, the police have to break the windows or force the doors open. How did they find out about the dog? What should you do if you see a pet locked in a car?

After you’ve rescued him

Once you’ve got the animal out of the car, try to find some damp (not soaking) cloths. Try to cool him down a bit so he won’t suffer from shock. Also, try giving him some clean, fresh water, but don’t force him to drink.

Car Safety Measures for Dogs
A restraining device for dogs can save their live and even their masters' life in the event of an accident. At the same time, keeping an animal restrained will prevent risky situations that can cause a tragedy.  Read more »
Link copied!
Interesting Articles
Bath Time
Knowing When to Bathe Your Dog is Crucial