How to Tell If Your Dog Is in Pain

If you suspect your dog is in pain, you'll need to look for signs that confirm your suspicions. Instinctively, dogs tend to hide their pain for as long as possible, so the symptoms often go unnoticed. 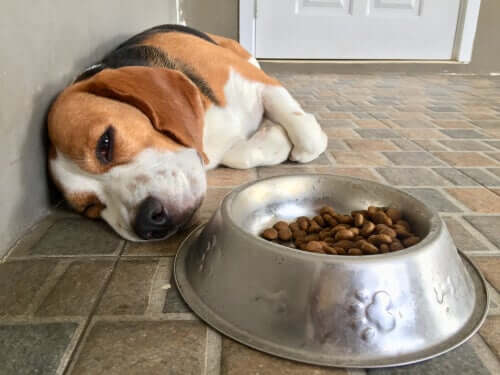 Determining whether or not your dog is in pain is no simple matter, and assessing the severity of the issue can be a complex task. It’s important to be aware that while many of the signs of discomfort in animals are easy to see, none of these symptoms – whether together or alone – are definitive proof of pain.

If an animal sustains an injury that would cause pain in a human, we assume that it’ll cause a similar level of discomfort in our pets.

It’s important to be aware that the signs of acute and chronic pain in animals may differ. Severe acute pain may cause signs of distress, including dilated pupils, restlessness, or lameness. They may also display changes in personality, such as increased or decreased physical activity, self-mutilation and excessive barking.

Other signs of acute pain include excessive salivation, and increased respiratory and heart rate. Tests may also reveal changes in blood biochemistry, including blood glucose, cortisol, ACTH and catecholamine levels.

Chronic pain may cause your dog to display protective behavioral patterns. These are adaptive responses to pain, and you can often see them in the animal’s posture and movements.

Animals will generally try to avoid aggravating the pain, and will be careful to avoid contact with painful areas. In dogs suffering from chronic pain, it’s common to see signs of stress, such as weight loss, and loss of appetite.

The advantage of using behavioral indicators to assess levels of discomfort in dogs is the immediacy of the results. Physiological changes take time to quantify.

Current methods for assessing levels of discomfort in pets are based on changes in behavior. Experts have designed a number of surveys, which allow vets and owners to measure certain parameters, and assign a score depending on the answers. The results are then measured on a pain scale, which helps vets decide on the most appropriate course of treatment.

Typical signs that a dog is uncomfortable include changes in posture, and changes in their energy levels. For example, they may refuse to move, or have difficulty lying down or changing position. You might also notice a difference in their movements, increased barking or whining, changes in urination, defecation or eating habits, or in their reaction to being touched or held.

There are currently a number of recognized pain scales in use. However, it should be noted that none of these scales can be considered an “official” point of reference when it comes to assessing if your dog is in pain. Examples of pain scales specifically developed for dogs include the Melbourne and the Glasgow scale.

It’s usually fairly easy to tell whether a dog is experiencing discomfort on one side of its body. The first symptom is usually lameness, but you may also notice stiff, rigid posture.

If the issue is centralized or affecting both sides, dogs won’t favor one side of the body or the other. It’s in cases like this that it’s important to pay close attention to the level of stiffness. For example, the animal may walk with its legs held rigidly, and its ears pressed back against its head. It may also seem reluctant to turn its head or flex its spine, and, instead, sits or lies with its muscles tensed.

The social context is also an important factor to keep in mind. In pack animals, isolation from the group can be an early sign of sickness or pain. As such, shy or fearful behavior is common in dogs that are unwell. On instinct, animals tend to hide their discomfort in the presence of predators in an effort to mask their vulnerability.

It’s been suggested that because humans could be perceived as predators, a dog may be afraid to show weakness in front of its owner. In other cases, however, animals suffering from intense pain have shown increased levels of attachment to their owners, often actively seek more attention than usual.

At the end of the day, you are your dog’s best friend, and know them better than anyone. You’re one of the few people who can tell when something’s not right, and take steps to get your pet the help it needs.

Did You Know that Pain Makes Dogs Aggressive?
Though there are plenty of other potential causes, it seems like pain can definitely play a role in making dogs aggressive. Learn more here. Read more »
Link copied!
Interesting Articles
Oral Hygiene
Caring for Your Cat's Teeth: How and Why