Reasons Why a Pet May Become Unconscious

Finding your pet unconscious can be rather concerning. Especially when you don't know what happened or if they'll regain consciousness. One thing is for sure is that is you must take immediate action -- do so carefully though. 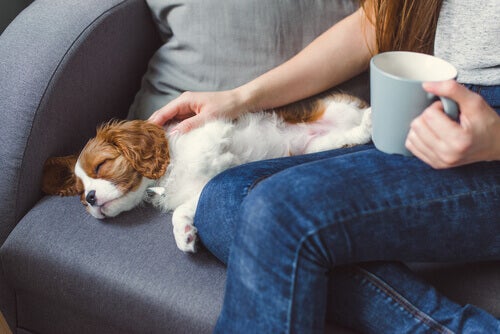 There are many reasons why your pet may become unconscious and there can be many levels of unconsciousness. For instance, it could be due to stupor – a depressed state of consciousness in which the animal only responds to strong stimuli.

Then there’s a coma, a state of unconsciousness in which the animal doesn’t wake up even after painful stimuli. So why else might a pet become unconscious?

Firstly, you must establish the degree to which an animal may be unconscious as well as the cause. Then, stabilize the animal and try to wake them up.

What to do if your pet is unconscious

Of course, the first thing you should do is consult a veterinarian. Mainly, because most situations that lead to unconsciousness are rather serious and can endanger the life of the animal. Thus, a doctor can make a diagnosis and indicate a course of action.

1. Try to figure out why

A neurological examination should be able to locate the probable area of the pathology that has led to the stupor or coma. Regardless of its location, the ability to walk and maintain posture is non-existent in both cases, and spinal reflexes may appear normal or increased.

A lesion in the cerebral hemispheres

The organs innervated by the cranial nerves may be altered, which we can usually appreciate by looking into the animal’s eyes. For example, the pupils may not respond to direct light so there may, in fact, be blindness.

A lesion in the brain stem

There may be damage in the cranial nerves, as we mentioned in the previous section. Again, looking into the animal’s eyes is the best way to get a clue. Look for dilated pupils, strabismus, absence of physiological nystagmus, etc.

Other more generalized signs are apnea, hyperventilation, or altered posture.

Inflammatory or metabolic diseases, intracranial neoplasms, and hydrocephalus could all lead to brain dysfunction and some degree of unconsciousness in the animal.

Treatment of brain dysfunction will be twofold. One aimed at ending the initial cause and the other one at lowering intracranial pressure.

Trauma and bleeding in the brain stem could also lead to acute dysfunction.

A brain herniation is usually preceded by hours or days of progressive diencephalon dysfunction, thus rendering the animal unconscious.

Metabolic diseases can generate diffuse brain dysfunction with progressive signs. This first becomes evident with an alteration in vision and then stupor or coma.

This is the case of a diabetic coma, heatstroke, encephalopathies of hepatic or renal origin, hypoglycemia, hypothyroid coma, hypoxia, etc. Also, toxic agents such as heavy metals, barbiturates, narcotics, ivermectin, or tranquilizers can cause it.

If the problem is poisoning, then it can be treated with a stomach wash or an antidote (if there is one), but a metabolic disease is much more complex.

A stupor or coma could be the result of a stroke or cerebral hemorrhage, which once again causes an increase in intracranial pressure. Causes of strokes in animals include:

It isn’t always possible to identify the underlying cause, but a predisposition to cardiovascular disease, so common in humans, is rare in animals.

However, if there’s suspicion of cardiovascular disease then there’ll be a need for coagulation and blood pressure tests. As a result, doctors usually approach cerebral infarction by:

Take immediate action if your pet is unconscious

As you can see, the causes of unconsciousness are usually serious. However, early detection and immediate action can return the animal to their normal state.

Finally, everything will depend on how fast the animal receives medical attention and on the information an owner can provide to the veterinarian in regard to their pet’s health. Above all, it depends on the seriousness of the underlying cause.

The Causes of Convulsions in Dogs
There are certain symptoms that cause dog owners to experience deep unrest. Today, we'll explain the possible causes of convulsions in dogs. Read more »
Link copied!
Interesting Articles
Oral Hygiene
Caring for Your Cat's Teeth: How and Why