Keeping your dog well-hydrated can help to reduce the temptation to drink seawater. 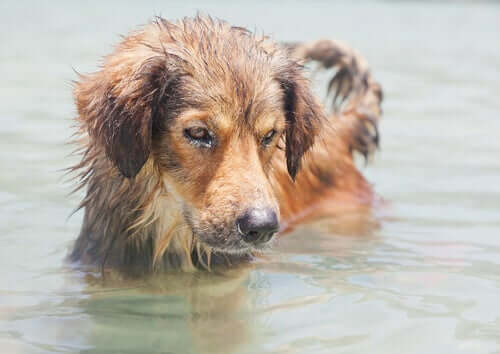 Taking your dog to the beach may put them at risk from saltwater poisoning. As well as the possibility of them ingesting sand, there’s also the danger that your dog might drink sea water. It’s important for owners to keep a close eye on their pets at all times in order to avoid poisoning and gastrointestinal issues.

Going to the beach with your dog can be a fantastic idea, especially if it’s only from time to time. Most dogs aren’t used to the beach, and will want to play and investigate everything, from the sand to the rolling sea waves.

This innate curiosity isn’t necessarily a problem, as long as your dog limits itself to digging in the sand, or watching the tide flow in and out. However, they often end up eating anything that catches their attention.

Even if you choose a clean beach without the usual cigarette butts, droppings or trash, sea water still presents certain hazards that owners need to be aware of.

As with people, drinking a small quantity of salt water isn’t dangerous for your pet. However, if they ingest larger amounts, your dog may experience the so-called “beach diarrhea”, accompanied by great intestinal discomfort.

Milder cases of saltwater poisoning usually last a few days, during which time you may notice your pet seems more lethargic, due to the general discomfort. If they have drunk huge amounts of saltwater, there may be a severe adverse reaction, with vomiting, muscle tremors, and seizures.

The electrolyte imbalance caused by the high levels of sodium in sea water can produce a lethargic or confused state in dogs. In this case, it’s best to seek veterinary attention straight away.

The presence of toxic algae in the sea is also a risk factor, especially if the algae is microscopic. However, while many of them can’t be seen with the naked eye, they often produce an unpleasant smell, which may allow you to identify them. Paradoxically, this smell is precisely what will awaken your pet’s curiosity, and encourage it to start drinking the water.

Algae are not just found in the sea, but can also be present in lakes, ponds, rivers, and even poorly maintained garden ponds. If you suspect your dog may have ingested algae, your vet should prescribe treatment for any possible toxins.

The treatment prescribed by your vet will depend on the amount of water ingested, and the symptoms the animal displays. Pumping the stomach may be recommended in the case of toxins. For milder cases, giving the animal fluids or inducing vomiting may be enough to improve their condition.

In the days following the poisoning, it’s normal for the animal to appear tired or display a lack of appetite. Gastrointestinal discomfort and some medications can also increase these feelings of lethargy.

To prevent saltwater poisoning, it’s important to keep your dog hydrated. Encourage your dog to drink by bringing water with you, and you should be able to curb the temptation to drink sea water.

Even so, their general curiosity and desire to explore their surroundings won’t go away completely. If you want your dog to be able to run freely off the leash, you need to check up on them regularly. We would also recommend that owners spend some quality time with their pets. That way, you can encourage them to burn off some energy, and they’ll be less likely to get into mischief.

Beach getaways can be a fantastic option for pet owners, and a chance to benefit from the natural environment. Being aware of the risks and keeping good control over your dog will ensure you both have a fantastic experience.

Is Sea Water Good for Your Dog?
The effects of sea water on dogs is a subject that is often talked about. Dog lovers often have doubts about his each summer. Read more »
Link copied!
Interesting Articles
Illnesses and Treatment
6 Genetic Diseases in Cats