Did You Know that Puppies Are Born Deaf?

Dogs are an altricial species, which means that the puppies aren't fully developed at birth. 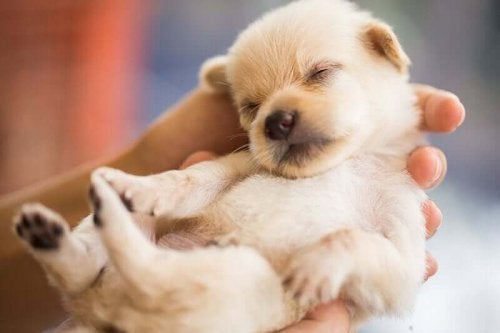 Puppies are born deaf and with their eyes closed, a characteristic they share with many other mammals. This is because their senses still aren’t fully developed.

In newborn puppies, the ear canals are closed, and remain so until they’re around two or three weeks old. As such, people often say that puppies are born deaf, as the development of their hearing occurs fairly slowly.

After the age of three weeks, owners and breeders should check whether their puppies are able to hear.

As mammals evolved, the reproductive and developmental strategies that gave them the best chances of survival were retained. While all mammals give birth to live young, the pregnancy process and stage of development at birth can differ greatly from species to species.

On the one hand, there are animals such as cows and other cattle breeds that have a longer gestation period of up to nine months, which guarantees complete fetal development at birth. Scientifically speaking, these species are known as precocial, as the young have almost all the basic abilities of adults. Normally, these are animals whose survival is dependent on their ability to flee potential predators.

On the other, there are mammals that have a shorter gestation period of around two months, such as dogs. These are known as altricial species, and produce immature offspring that are dependent on their parents for food and protection.

Many of a puppy’s organs are at an incomplete stage of development during the first few days of its life. The brain, eyes and ears are just a few examples, which is why they require great care and attention when they’re young.

While people often say that puppies are born deaf, the truth is that they can hear vague, indistinct noises. As such, it’s important to give them a quiet environment to allow their hearing to develop properly.

The presence of constant noise causes pressure changes and vibrations in the puppies’ auditory structures, which could have an impact on their development.

The ear canals begin to open at around two weeks old, roughly the same time that they open their eyes. However, unlike their eyes, their ears will be almost fully developed by this time.

Owners can check that their puppy’s hearing is developing properly, as you can actually see the ear canal opening. You can also check the animal’s response to sound.

However, as puppies should only be re-housed after the age of 12 weeks, most owners will never have to do this.

Breeders and owners who do have a litter of puppies at home should check how their auditory development is progressing. If their ears still haven’t developed after the age of three weeks, you should book an appointment with your vet to check for any potential problems.

Puppy Development: Answers to Your Questions
You should keep track of the puppy development so you know just what to expect when your little furball becomes an adult. Read more »
Link copied!
Interesting Articles
Baby Animals
Fading Puppy Syndrome: Beware of Dehydration

Fading puppy syndrome mainly affects newborn animals. It happens because puppies have very low immunity right when they're born. Unfortunately, there are…

Your pets are part of the family. In the same way you have health insurance for your family, it's important…

Scabies is a group of diseases that mites that feed on the skin can transmit. In general, this disease is…

Intestinal parasites in puppies and kittens are one of the most common illnesses. This is especially true during the early…

Rescuing a defenseless an orphaned newborn kitten is an act of pure love. However, a lack of proper and specific…

Baby Animals
Puppy Nutrition - What to Feed Them

Proper puppy nutrition is very important. Keep in mind that when you have a puppy you must take care of…