When can I separate puppies from their mother? 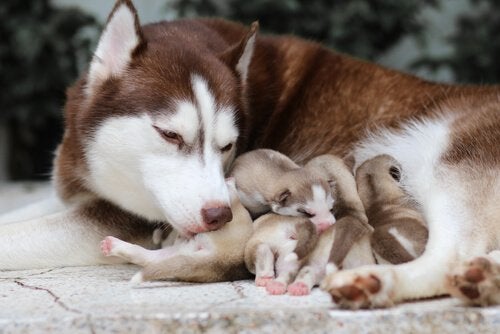 A healthy, happy and well-adjusted puppy will need to stay with his mother for at least 10 weeks, since each week matters in different ways for his health and socialization

The first minutes of a puppy’s life are the most important. Making sure they bond with their mother and siblings is necessary for proper development. If you’re wondering when you can separate puppies from their mother, we’ll give you the answer.

Why puppies should be with their mother

There is a stage that every puppy must experience called imprinting. It is vital that the stage be carried out properly because the puppy’s ability to develop correctly and grow into a well-adjusted, happy dog depends on it.

What is imprinting? Well it is simply the first experience of socialization, one that will teach him certain guidelines. He’ll spend the first moments of his life with his mother and his siblings, which will help him with several things that will serve him throughout his adult life. Here are some:

These factors are what make the difference between one dog and another. When you see dogs that bark about everything, don’t want to be with anyone except their owners, and are afraid of everything, it’s likely because they did not experience proper imprinting.

So, when can you separate puppies from their mother?

Due to everything that imprinting involves, the puppies and their mother must be allowed to be together as long as possible, but at least 10 weeks are recommended. Why? Because each of the weeks has a purpose.

So, if you can afford to wait until three months, that would be ideal. Your puppy will have good imprinting, which will result in a healthy, happy and well-adjusted dog.

Just as with human beings, the pregnancy of a cat or a dog is a truly beautiful moment. Accompanying your beloved pet during her weeks of gestation will help her feel…

Lavender oil comes from the flowers of lavender plants--a very common plant in the United States. This oil is especially…