Chemical Castration for Dogs: What Is It?

For dogs that can’t be operated on because of a medical condition, chemical castration may be an option. 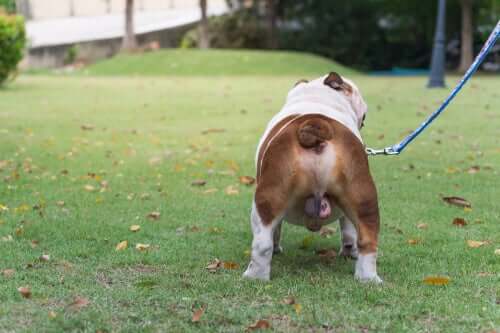 Surgical sterilization is the safest and most effective way to control the reproduction of dogs, as well as to prevent other illnesses. However, chemical castration is becoming a more popular way to avoid stray dogs from overpopulating.

An estimated 75% of the dog population roam freely and reproduce without any control. This can lead to serious problems, such as transmitting diseases, attacking people, and causing traffic accidents.

Chemical castration methods include hormonal drugs, immunocontraceptives, and inorganic sterilizing chemicals. All have the same objective: to prevent animals from reproducing. There are some countries that don’t allow surgical castration, therefore chemical castration is a good alternative.

Hormonal regulation of fertility in animals begins with a hormone synthesized in the brain called gonadotropin-releasing hormone (GnRH). As its name suggests, GnRH controls the release of gonadotropins, but also follicle-stimulating hormones (FSH) and luteinizing hormones (LH). These regulate the production of sex hormones and ultimately spermatogenesis, ovulation, and sexual behavior.

Treatment is usually an implant under the skin. It releases an agent that prevents the action of gonadotropin-releasing hormone (GnRH).

This non-surgical castration therapy is a contraceptive vaccine. Some antibodies play an important role in reproduction. Therefore, if antigens are used to release these antibodies, we can make a dog infertile as long as there are enough antibodies in the blood.

Any chemical method for sterilizing males must meet three criteria. Firstly, it must be effective in all or a high percentage of treated animals. Secondly, it can’t have side effects and it needs to be safe. Finally, it needs to have a permanent and irreversible effect after one administration.

This chemical is used chemically sterilize male dogs. It’s administered through an intravascular injection at the center of the testicle.

This medication results in permanent and irreversible fibrosis of the seminiferous tubules, rete testis, and epididymis. Therefore, the dog is sterilized. However, hormones remain intact. Visually, after a while, the testicles become smaller and change shape or texture.

One of the most commonly used chemical compounds is calcium chloride. Like the previous one, it’s injected directly into the testicle. This causes fibrosis, necrosis, and degeneration of the seminiferous tubules, so that no sperm can be produced.

It’s a very inexpensive, pain-free method, so it could be an alternative to more expensive drugs that may not be available in many countries.

Hypertonic sodium chloride can be an economical and easy-to-administer alternative. It causes degenerative changes in testicular seminiferous tubules through an intravascular injection.

Some studies suggest that this method is better for young dogs. However, it won’t work in adult dogs.

Advantages and disadvantages of chemical castration for dogs

In some respects, chemical castration for dogs can be a great alternative to surgery. Despite this, there is also a negative side. It’s always best to talk to your vet, who can offer you the best options for your dog.

Advantages of non-surgical sterilization in the dog

Disadvantages of chemical castration for dogs

Chemical castration for dogs can contribute to your pet’s well-being. Check with your vet to learn more about the benefits and what kind of care you should provide to your pet once it has gone through the procedure.

Is neutering good for pets?
Neutering cam benefits pets in several manners. Many people neuter their pets immediately after adopting them due to it being a matter of health and safety. However, is neutering good for pets? It's necessary to analyze the pros and cons of this common procedure in detail. Read more »
Link copied!
Interesting Articles
Illnesses and Treatment
6 Genetic Diseases in Cats