Autoimmune Diseases in Dogs: What to Know?

When facing any of the many autoimmune diseases in dogs, it can be scary not knowing what’s happening, especially as they're often difficult to diagnose and treat. 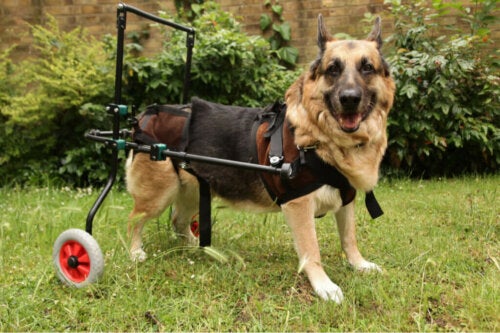 Autoimmune diseases can affect both people and pets. Even if we all have a vague idea of the immune system, it’s common not to entirely understand the way it works. We may not be able to describe the location of its organs or visualize its function.

This is because the cells of the immune system spread throughout the lymph nodes of the entire body. They are also in the spleen, thymus, lungs, intestines, and every other organ in the body. These cells patrol the body, circulating in the bloodstream.

In autoimmune diseases, the immune system mistakenly attacks the body’s own tissues. The immune cells are unable to distinguish the normal healthy cells in the body from foreign ones, and, therefore, try to destroy them.

The cause of this “error” isn’t well understood. The disease can affect only one system or multiple body systems, such as the skin, connective tissues, nerves, and muscles. Also, the endocrine system (the system that controls hormones and other chemicals), the joints, the red blood cells, and the digestive system can be equally affected.

What factors are associated with autoimmune diseases in dogs?

Currently, science can’t fully explain what causes these diseases. However, in many cases, a dog’s genetics is the main suspect. In this sense, a greater incidence of this type of diseases exists in some breeds.

For example, lymphocytic thyroiditis occurs more frequently in Great Danes, Golden Retrievers, Cocker Spaniels, Old English Sheepdogs, and Beagles, to name just a few. It’s worth noting that some of these breeds are susceptible to more than one autoimmune disorder, such as the Old English Sheepdog, which is also prone to autoimmune hemolytic anemia.

Furthermore, reports indicate other triggers such as exposure to certain medications (antibiotics), chronic or tick-borne infections, and cancer. Other chronic infections such as heart valve disease and spinal cord infections can also act as triggers.

Given the association between antibiotics and autoimmune diseases, many studies point to intestinal microbial imbalance as a likely cause. Finally, even if a definitive link hasn’t been established, vaccines have also been connected to these diseases.

There’s currently a broad spectrum of immune system disorders in dogs. However, in veterinary practice the following are the most common ones:

In all cases, early recognition is extremely important. If left untreated, the complications of autoimmune diseases are serious, and the involvement of multiple systems is common.

The later autoimmune diseases are treated, the more challenging and complicated the diagnosis and treatment become.

What symptoms can warn of an immune system disorder?

It’s important to keep in mind that the dog must constantly undergo checks. Look for small bleeding areas on the skin and gums, called petechiae. It’s also necessary to detect ulcerations on legs, skin, eyes, and mouth. You’ll need to be aware of the appearance of areas of alopecia and scabs on any part of the body.

It’s worth noting that a great ally for the early detection of lesions are dog groomers. They often detect bruised skin, bleeding gums, or bloody diarrhea while shaving. These professionals have detected many cases.

It’s important to observe daily the possible presence of blood in urine and feces, or a bloody nose. Also, be aware if they have red, sore eyes, and thick mucus-like eye discharge.

Of course, changes in habits such as loss of appetite, lethargy, fatigue and fever are other important warning signs. Important symptoms such as seizures, blindness, loss of balance or coordination and tremors can also occur.

How are autoimmune disorders diagnosed and managed?

First, it’s necessary to have detailed clinical histories, analyze blood and urine, take tissue biopsy samples, as well as performing X-rays, ultrasounds and MRIs. All this aims to establish a preferential diagnosis.

Equally, the veterinarian will probably prescribe medication to help the dog fight any infection, virus, or allergy that may be causing the symptoms. Generally, steroids like prednisone are the first line of treatment.

The case of vaccination

We can’t lose sight of the controversy surrounding vaccination booster shots in the occurrence of autoimmune diseases in dogs. Of course, vaccines, by stimulating the immune system, can have a negative effect on a dog with autoimmune diseases.

Thus, experts recommend keeping vaccinations to a minimum or stopping them entirely. It’s common to perform the antibody titer exam. This test checks if the levels of antibodies are sufficient to protect against canine diseases without a booster.

It’s important to know that while some autoimmune diseases disappear without ever relapsing, others can last a lifetime. Thus, for these serious diseases that don’t respond to treatment, a method called therapeutic plasma exchange (TPE) can be used. This treatment extracts the patient’s blood and filters it to eliminate the antibodies that cause damage.

In addition, given the role of the intestinal microbiome, there are intestinal restoration supplements for dogs, which supply the beneficial bacteria missing from the dog’s microbiome. These capsules contain carefully selected fecal material —yes, feces— from healthy donor dogs. This procedure is fecal microbiota transplantation.

Once a pet is diagnosed with an autoimmune disorder, it’s necessary to watch for relapses. It’s important to perform regular and thorough health examinations, and also to immediately inform the veterinarian of any changes in your pet’s activity level or physical condition.

For owners, the most important recommendation would be to know what’s normal for their dog. Take 10 minutes a day to actually examine them, including their gums. If you find something wrong, act quickly.

Mental Health and Illness in Dogs: How to Treat Them
Things like mental health and illness are real for our dear pets. In the following article, we'll tel you how to treat some of them. Read more »
Link copied!
Interesting Articles
Illnesses and Treatment
What Causes Brachycephaly in Dogs?