Canine neosporosis is an infectious disease that often presents itself asymptomatically. However, in other cases, it can be lethal. 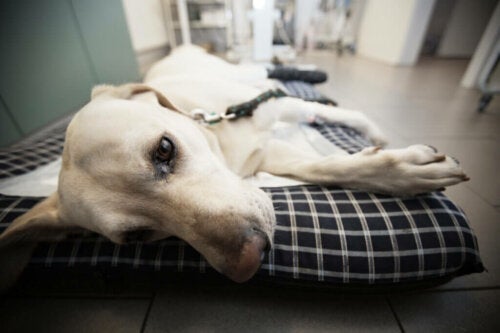 Neospora caninum, a coccidia parasite hosted by horses, cattle, and other mammals, causes the infectious disease called canine neosporosis. The dog is its only permanent host, so the pathogen usually settles in its muscles in the form of tissue cysts.

In general, many of the infected dogs are asymptomatic, but affected puppies can get a very poor prognosis. If you want to know more about canine neosporosis and how to identify it, read on.

As previously mentioned, this infection is caused by the coccidia Neospora caninum, an obligate intracellular parasite. Until recently, scientists believed that the dog was the only definitive host, but studies revealed that other canids such as coyotes, gray wolves, and dingoes can also be definitive hosts.

Professional veterinary websites estimate that the prevalence of the parasite —the number of infected dogs in a given population— varies from 0 to 100% depending on the region. In the United States, for example, records show that approximately 7% of all dogs test positive in certain areas. In England, the prevalence is between 5.5-23.6%.

Stray dogs and those in contact with livestock are more likely to become infected.

The parasite has 3 forms according to the stages of its life cycle. They’re the following:

As we’ve said, many infected dogs never show symptoms. Unfortunately, some adult dogs and puppies are more likely to show certain clinical signs. These signs are the result of tachyzoites causing inflammation and necrosis in affected tissues.

Thus, the most common symptoms are neuromuscular. Among them, we find the following:

We must bear in mind that there’s no 100% effective treatment to date. Some antibiotics administrated to puppies have some success, but medication doesn’t guarantee the animal’s survival. Clindamycin is the drug of choice for 3 weeks up to 2 months in almost all cases.

In general, adult dogs tend to respond better to treatment than puppies. Once the neuromuscular clinical symptoms appear in the animal, the prognosis becomes extremely poor.

If treatment is prompt and administered before paralysis sets in, the prognosis improves slightly.

As there’s no definitive treatment, the best measure is to prevent the disease. Veterinary websites inform us that pregnant dogs can transmit the pathogen to their puppies by way of the placenta, so we must be very careful with pregnant females.

In general, dogs get the disease by maintaining close contact with meat or cattle tissues that have bradyzoite cysts. Vets still don’t know if the oocysts in the environment are also infectious for dogs —although they’re for livestock. For this reason, the best measure is to limit dog-livestock contact as much as possible.

As you may have noticed, canine neosporosis often goes unnoticed but, when it begins to manifest itself, it can become lethal. If there are signs of the illness in your region, limit your dog’s contact with livestock and rural environments. In case of infectious diseases, it’s always better to prevent than to cure.

Symptoms and Treatment of Arthritis in Dogs
Just like human beings, canines can also suffer from arthritis. Read today's article to discover more about the symptoms of treatment of arthritis in dogs. Read more »
Link copied!
Interesting Articles
Illnesses and Treatment
How to Treat and Moisturize Calluses in Dogs?