Find Out All About Cunning Wild Canids

Do you know anything about wild canids? Obviously, calling them all "wild dogs" is a mistake, because their are multiple species, all different. Here, we'll show you some of the most interesting ones. 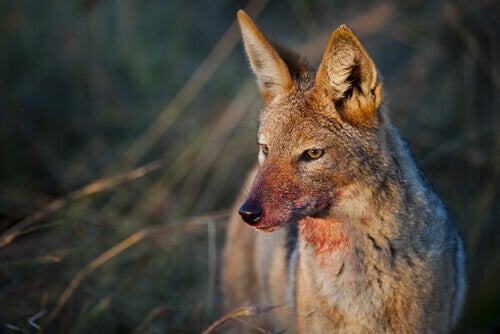 The canid family consists of carnivorous animals of all types, colors, and sizes. In general terms, all its members are very similar to each other, even when we talk about wild canids. In fact, sometimes the difference between the various dog breeds is greater than between the dogs and wolves, for example.

Some species of wild canids sound more familiar than others, as is the case of the wolf or the fox. Others inhabit lands so far away that we may not know much about them. This is why we want to take this opportunity to show you some of the most interesting wild canids in the animal kingdom.

What wild canids are present on the European continent?

The wolf and the red fox

Canis lupus lives in the cold and temperate zones of the northern hemisphere and is the most numerous of the wild canids. It can weigh up to 80 kilos and the width of its foot allows it to tread firmly when running on snow. In winter, it hunts in herds, but, in the other seasons, it’s solitary or, at most, hunts in pairs.

Vulpes vulpes is somewhat smaller than other members of the Canidae family, including several breeds of domestic dog. Its typical features include a fine muzzle and a thick tail, as well as a characteristic reddish coat.

The fox is not only an exclusively carnivorous animal. If necessary, its diet includes everything from grasshoppers to fruits and berries.

What wild canids can we find outside Europe?

Canis latrans are found all over the American continent. In fact, it’s considered one of the few animals that’s managed to expand its habitat since the “conquest” of America by Europeans. Although it sometimes gathers in herds, it’s usually solitary.

The coyote is less than 24 inches high and extremely slender. So much so that it may appear malnourished at first glance even if it’s is in good health.

The three species of jackal

Three medium-sized species of the genus Canis are called “jackals”, predators that live in most of Africa and Asia. However, it’s true that there are also small populations in southeast Europe. Like the wolf, it also hunts in packs, but at night.

If there’s no prey or carrion, it devours small rodents and birds. It may also invade indigenous villages, bingeing on their food.

Canis lupus dingo is the only placental (i.e., not marsupial) mammal in Australia, and is nothing more than a species of wild dog. It’s very similar to the domestic dog except that its ears are always erect. And also because, instead of barking, it howls.

It’s not only a terror for kangaroos and wallabies, but also for domestic cattle. It hunts at night and is bolder than the wolf when it enters farms. Although it always works with caution.

The maned wold is native to the bush and grassland regions of South America. In fact, it’s the largest of its wild canids.

These animals are slender, skinny, and have long legs. Specifically, their hind legs are longer than those in the front, which makes it a bit clumsy. Even so, it’s said that on flat ground they’re almost as fast as cheetahs.

The name of these wild canids refers to the mane that they wear between its shoulders, which bristles when excited.

The wild canids that are, despite everything, known as dogs

Also known as the painted wolf or the Cape hunting dog, it lives in the plains and lowlands of South Africa. It forms packs of up to 50 individuals, which chase their victims for several hours until they surrender. While some members of the pack harass the cattle, others cut them off, jumping ferociously over them.

But if deer, their favorite prey, are out of reach or a lion is lurking, then they must settle for eating small micro-mammals.

Also known as Cuon (Cuon alpinus), this animal is native to the Asian continent. Today it’s in danger of extinction and its number is so small that it’s practically impossible to find in nature.

Similar in size to the jackal, the red dog is a daytime hunter that acts on herds of 20 or more individuals. Its hunting tactics are analogous to those developed by the African wild dog.

The Nyctereutes procyonoides, which moves along the rivers of Northeast Asia, literally looks like a dog disguised as a raccoon. It has short legs, a bushy tail, and a short and beautiful coat, in addition to the characteristic “mask”.

Final note: The most mysterious wild canids of the Amazon

Atelocynus microtis, or the short-eared fox, is one of the rarest canids in existence. In fact, experts consider it today as a mystery of nature. That’s because it has the size of a dog, the agility of a cat, and the native name of the fox.

Canaan Dogs: Wild for Several Generations
Thanks to its recent past, Canaan dogs are a very ingenious animal when faced with problems; also, this breed is suspicious of the presence of a stranger. Read more »
Link copied!
Interesting Articles
Mammals
Characteristics and Behavior of the Capuchin Monkey