Cat poisoning caused by human food is real. In fact, some vets think that any food not specifically designed for cats could affect their digestive system and lead to vomiting, diarrhea, and loss of appetite. We're about to tell you which human foods aren't safe for a feline. 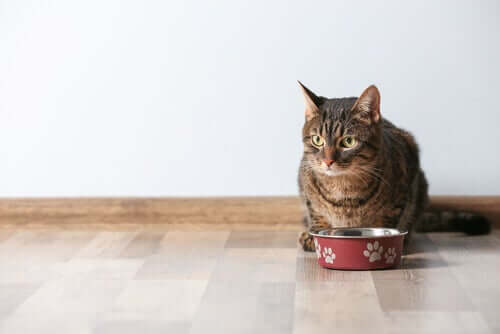 Did you know that cat poisoning is often caused by human food? It isn’t necessary to give them any because felines love their cat food (especially the wet kind) pate and tuna.

Basically, those three types of food should comprise this animal’s diet. Some owners consider varying their pet’s menu a bit and don’t mind sharing their human food with them. However, they should be very careful because some of it could lead to cat poisoning. Would you like to know which? Continue reading.

When you feed human food to your pets you must be careful with what you share with them. You may not realize you could be doing a disservice to your feline when you give them certain things from your plate.

More and more people are opting to make dinner for everyone at home, including their animals. However, it’s very important that whatever you prepare for them doesn’t contain ingredients that can be toxic or harmful to their health. Pay close attention to the following food items that could lead to cat poisoning:

1. Chocolate could cause cat poisoning

It may sound strange to you but some people give chocolate to their pets. They think that because they like it, their animals will too. Well, they do like the sweet taste in their mouths, but what they don’t know is how harmful it is to their health.

Chocolate contains a substance called theobromine, an alkaloid that stimulates the central nervous system. This substance is related to caffeine, although it has a milder effect. The feline body can’t digest it, so it takes longer to eliminate it and it could accelerate their heart rate. The most common symptoms are over-excitement, vomiting, diarrhea, and even death if eaten in large quantities.

The caffeine typical of coffee is another dangerous substance for cats and it could lead to disorders in the nervous system. Its toxicity could arise in the form of shortness of breath, seizures, palpitations, restlessness, vomiting, and diarrhea.

While one of the cat’s favorite foods is canned tuna, eating raw fish could be toxic for them. This is because dead animals often contain bacteria that, when ingested, are harmful to anyone’s health. In addition, the enzymes present in raw fish destroy Vitamin B1, which is vital for an animal’s proper functioning.

In turn, there’s an additional concern if they were to eat the bones of raw fish. This is because they might tear their digestive tract or stomach if they don’t chew them well. Also, when it comes to tuna, it’s important to moderate the portions so as to avoid mercury poisoning.

4. Citrus could lead to cat poisoning

Lemons, oranges, and grapefruit can all upset a feline stomach and lead to diarrhea. Other types of fruit that you shouldn’t give your animal are grapes because they can affect their kidneys. On this note, avocado contains a fungicidal substance called persin that is toxic in cats.

Dogs love bones and some kittens do too. However, these are dangerous to them when cooked in any way. In this case, it isn’t due to any component that could be toxic to the animal, but because they break into splinters. These, just as with fish bones, can rupture something inside the mouth and their digestive tracts. This kind of damage would require veterinarian intervention.

These two contain thiosulfate, an element that can destroy red blood cells and lead to anemia in a cat. This compound is also present in leek and chives. The symptoms here are weakness, apathy, vomiting and little interest in food.

Who doesn’t love sweets! Animals love them as much as we do because sugar is as yummy as it is addictive. But, just as an excessive intake of sweets is bad for people, it’s also bad for cats. Ingesting it in the long term can lead to type II diabetes and also to obesity.

Cat poisoning is also caused by other types of food such as raisins, alcohol, dog food, tomatoes, and potatoes. 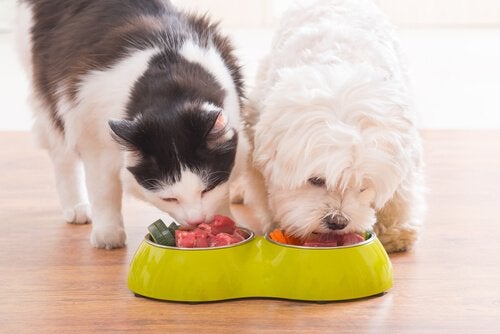 Cat and Dog Food: Can A Cat Eat Dog Food?
If you have a cat and a dog, you might be tempted to just put down cat food and dog food and let them eat either. We'll tell you why this is a bad idea. Read more »
“]
Interesting Articles 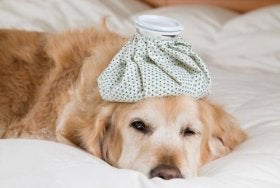 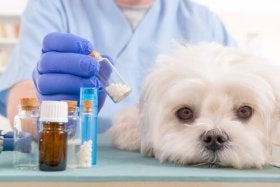 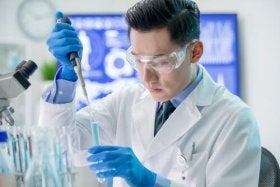 Illnesses and Treatment
What Is Bacteriophage Phi29? 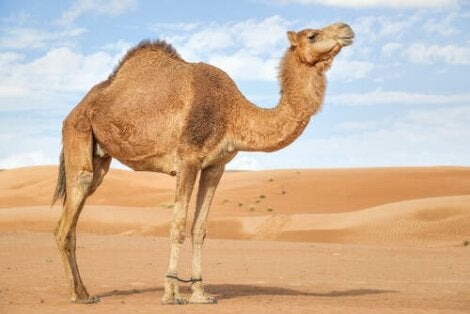 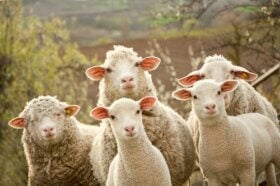