It's always important to pay attention to your animal's health. However, during canine pregnancies, this attention must be exhaustive in order to avoid the risks associated with this very delicate period. 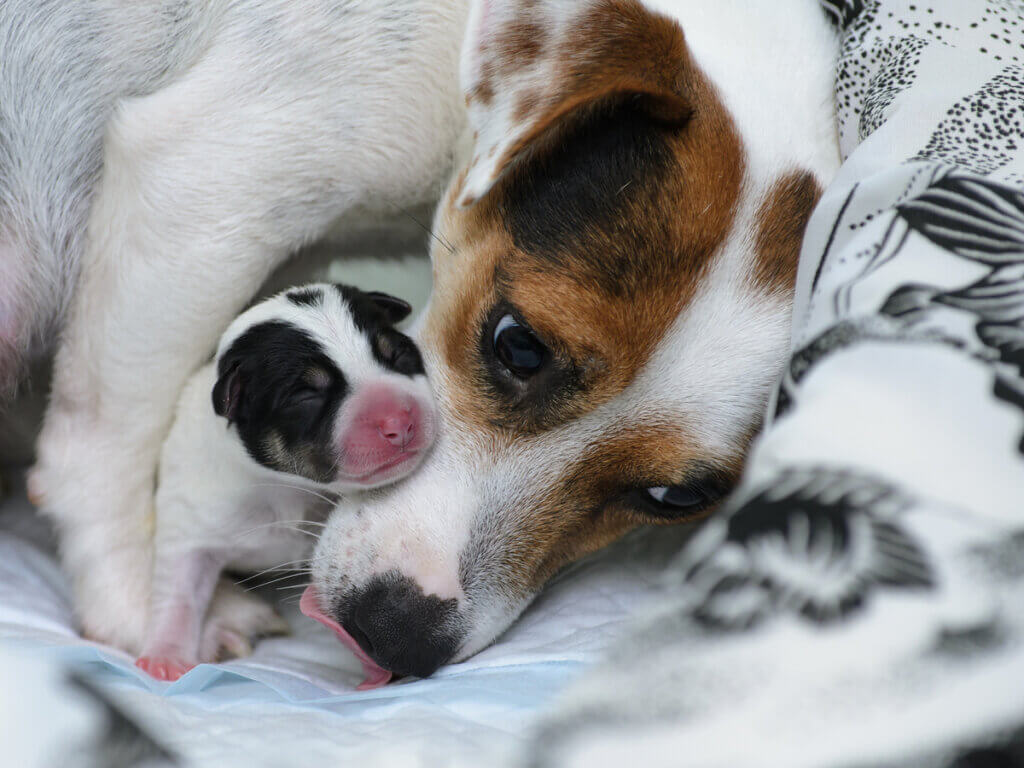 The gestation period in dogs is one of the most critical. Therefore, permanent attention to their health status is essential. During these two months, many situations can take place that put the integrity of the reproductive system of the female at risk. In addition, emergency cases can also occur that threaten their life and the puppies. For all of these reasons, we believe it’s essential to inform readers about frequent emergencies during canine pregnancies. As they say, good prevention is the best treatment.

This drop in blood calcium probably has its origin in the accumulation of this nutrient in the milk, in view of the lactation. However, in order to become a serious problem in canine pregnancies, there must also be an insufficient supply of calcium in the animal’s diet.

Calcium deficiency in the blood leads involves a decrease in the cell membranes, altering the membrane potential. The first symptoms that this pathology generates are restlessness, panting, muscle spasms, and hyperthermia. If treatment doesn’t take place in time, a tetanic seizure occurs (rigid and continuous contraction of the muscles), which leads to death.

The short-term goal is to restore blood calcium concentrations. For example, through the intravenous administration of specific solutions in the veterinary clinic.

The effect of this intravenous administration only lasts for a few hours, so short-term maintenance therapy is necessary. Therefore, the dog should take calcium supplementation at the end of pregnancy and during lactation, to prevent and avoid relapses.

The increase of progesterone in the blood has an antagonistic effect on insulin, favoring the appearance of hyperglycemia. In this way, it reduces the transport of glucose into the cells, which is why we talk about gestational diabetes in dogs.

A longer than usual gestation is a common concern of many owners when the delivery is delayed. In some cases the fear is unfounded, because the supposed delay is actually due to a time lag between the day of mating and the day of delivery.

Still, in other situations, there’s a pathological explanation. For example, a dog whose previous birth involved dystocia. At the same time, in some cases, owners believe their dog to be pregnant when, actually, she isn’t.

In false alarms, the absence of symptoms should give us a clue that everything is actually going well. But, in the rest of the scenarios, the consequences of uterine inertia (inability of the uterus to start contractions) will develop.

If the dog’s body fails to properly expel the fetuses, they will die inside the uterus and begin to decompose. This will trigger a serious infection in the mother, who will have an abnormal and foul-smelling vulvar discharge.

The best treatment will be to perform a cesarean section to remove the retained fetuses and avoid complications in the female.

A dystocic birth is slower, more laborious, and more difficult than usual. In many cases, it puts the female at risk, as well as her puppies. Simply put, we can classify dystocia as follows:

In non-obstructive dystocia, the symptoms are those of a prolonged gestation, with the peculiarity that labor has usually begun. The problem is that it doesn’t progress and the dog remains stuck in the dilation phase.

In cases of obstructive dystocia, the bitch does enter the second stage of labor (expulsion) and continues to struggle without results. If the animal’s efforts are unproductive for more than 45 minutes, this is a sign that something is wrong and it’s time to consult with a veterinarian.

Females with primary uterine inertia may respond positively to the administration of exogenous oxytocin. This hormone is responsible, in normal births, for causing uterine contractions. However, if the cause isn’t completely clear, then the condition of the animal and fetuses should be thoroughly evaluated before proposing it.

It may be preferable to perform a cesarean section on a bitch that’s expecting many puppies and is weak, because she won’t be able to withstand labor.

In bitches with obstructive dystocia, the main objective of the treatment will be to remove the obstruction:


As we’ve seen in this article, complications during canine pregnancies can be diverse and have very different causes. For this reason, in the face of any atypical situation during this delicate process, it’s essential to go to the vet.
Tips For Caring For Pregnant Dogs
The arrival of new puppies in the family is often an extremely important event. Today, we want to off a series of tips on caring for pregnant dogs. Read more »
Link copied!
Interesting Articles
Illnesses and Treatment
Mycotoxins and Animal Production

Obsessive compulsive disorder (OCD) is a pathology derived from anxiety and characterized by intrusive, recurrent, and persistent thoughts that produce…