Description of Infectious Tracheobronchitis in Dogs

Infectious tracheobronchitis in dogs is usually mild but it's sometimes serious in puppies. They may need treatment depending on the cause. 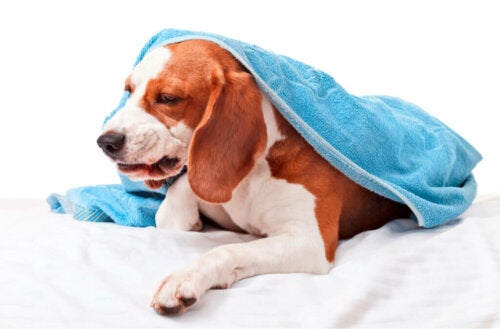 Infectious tracheobronchitis in dogs – also known as kennel cough – is a syndrome. It’s a mild inflammation of the respiratory tree in many cases but can translate into lethal bronchopneumonia in others. There are multiple viral, bacterial, and parasitic agents that can cause it.

Chronic tracheobronchitis usually affects small breed dogs, although it’s been detected in all types of dogs. Read on to learn more about this common disease in the canine world.

This is a complex clinical entity. It usually arises as a secondary effect of previous viral infections in the respiratory system. The following microorganisms are among its most common triggers: Bordetella bronchiseptica, canine parainfluenza virus (CPIV), and others.

Other parasitic causative agents out of the virus and bacterial groups are Aelurostrongylus abstrusus, Capillaria aerophila, Crenosoma vulpis, and Oslerus osleri. These are examples of pathogens that can trigger tracheobronchitis.

The tissues of the upper respiratory tree swell during the disease. As a consequence, the tubular diameter of the tracheas, bronchi, and bronchioles decreases and impedes the proper entry and exit of air in and out of the lungs. This is the reason for the characteristic cough of this disease.

There are times when the chronic cough is due to functional diseases of the heart or lungs though.

How does a dog become infected?

The causative agents of the disease are highly contagious. For this reason, the pathology is known as “kennel cough” because an outbreak is more likely to occur in places where there are many dogs crowded together.

In any case, a single dog at home isn’t completely exempt from it either. Viruses and bacteria travel through aerosols or through direct contact with a sick animal. Thus, making contact with an infected dog during a walk is enough to bring the pathogenic microorganism home.

Infectious tracheobronchitis in dogs is a disease that only affects the respiratory tissue. The causative agents cause lesions in the bronchi and bronchioles and predispose them to subsequent infection by other parasites. Some of the most common clinical signs are:

In addition to the characteristic cough, the dog may have a fever, runny nose, swollen tonsils, sneezing, lack of appetite, and general listlessness. Unfortunately, respiratory symptoms may linger for days or weeks after the infection has subsided. It isn’t life-threatening though.

This depends on the causative agent. There’s nothing you can do if it’s a virus – you just have to wait for the animal’s immune system to fight the infection on its own. Fortunately, this is usually the case. However, a bacterium like a Bordetella bronchiseptica usually requires antibiotics.

Some cases require extended treatment, but all symptoms disappear in one to three weeks usually. The dog may be prescribed antitussives and anti-inflammatory drugs to alleviate the symptoms of the disease during this period. Thus, the veterinarian will guide you in the treatment choices based on your pet’s condition.

Finally, we must point out that there are vaccines for some of the causal agents — such as the canine adenovirus. They don’t prevent the disease 100% and the animal could acquire the disease by other means. The shots can, however, drastically reduce the probabilities of occurrence.

Mild disease in the majority of cases

In most cases, infectious tracheobronchitis in dogs resolves on its own over time. However, you must consult a veterinarian about the symptoms. This is because the disease is sometimes due to parasites and bacteria and you must destroy them through pharmacological action.

Unfortunately, the clinical condition can become quite severe in infected puppies. In these cases, an extended period of medical care is usually necessary and the prognosis is uncertain.

Diseases that Produce Breathing Difficulties in Dogs
The origin of breathing difficulties and problems in dogs is quite varied, making it difficult to avoid complications. Read more »
Link copied!
Interesting Articles
Illnesses and Treatment
6 Genetic Diseases in Cats