Daily grooming and proper hygiene are essential to prevent eye infections in dogs. Also, you must consult your vet if the appearance of your pet's eyes changes. 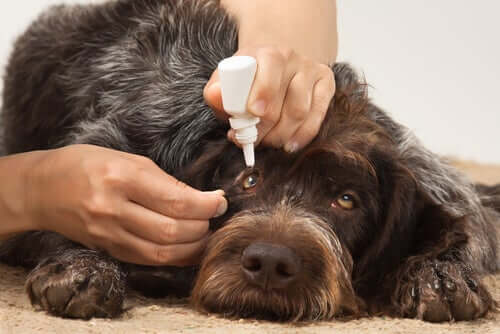 Eye infections in dogs can be caused by many organisms. In addition, they could be a symptom of a different kind of systemic disease.

The eye is a very complex and sensitive organ that can easily get damaged due to small changes inside or outside the body. So, as a pet owner, you must remain vigilant as regards their eye health and maintain it through daily cleaning. There are some saline-based solutions in the market just for this purpose. And, you must also remove their daily rheum (eye boogers) as many times as you need to.

So, today we’re going to talk about the most common eye infections in dogs. Some are more common than others, but all are of equal consequence. You must go to the veterinarian as soon as possible if you notice any change in the appearance of your dog’s eyes.

This is a parasitic infection produced by the Toxocara canis nematode in dogs and humans, so this is a zoonotic disease.

A dog becomes infected with toxocariasis when they eat meat or food that contains the eggs from this parasite. These eggs pass through the intestinal wall upon reaching it and then get on the blood “train” to reach the liver.

However, there are times when they go beyond the liver barrier and reach the brain (this leads to meningitis) or the eyes. When larvae land in the eyes, a single one of them can develop and destroy several structures of the eyeball, which produces granulomas and chronic endophthalmitis (inflammation of the tissues inside the eye).

Conjunctivitis is one of the most common problems treated in veterinary clinics. In most cases, they’re the result of an eye infection. It could be viral, bacterial or even the result of an allergic reaction.

The conjunctiva is a thin, translucent layer that covers the eye and the inside of the eyelids. Due to its characteristics, this tissue isn’t visible unless there’s a problem. The most common symptoms of conjunctivitis are:

Occasionally, conjunctivitis may be immune-mediated and breed-related. The German Shepherd, the long-haired dachshund, and the miniature poodle are among the most affected breeds.

Infiltration of plasma cells can occur through the nictitating membrane or third eyelid in these types of dogs and it leads to blepharitis.

This is a disease resulting from bacteria Ehrlichia canis, usually brought about by infected ticks. So, this pathology can be lethal because it mainly impacts the blood, its components, and the immune system. The main symptoms are anemia and leukopenia or a reduction of white blood cells.

Most dogs afflicted by this condition will have an eye-eyelid inflammation during the onset and subsequent development of the disease. In addition, the disease affects other regions of the eye, such as the retina, which causes pain and severely decreases vision.

Telaziosis in dogs is caused by the Thelazia Callipaeda worm. This parasite is native to Asia but has already reached different regions of the world.

Both adult parasites and their larvae move into the eyeball of domestic carnivores and wild carnivores. So, they’re transmitted by arthropods.

The presence of these worms in the eyes of animals leads to various degrees of damage:

Learn How to Clean Your Dog’s Eyes
You should clean your dog's eyes frequently. If his eyes are very crusty, make sure that there isn't a medical cause for the problem. Read more »
Link copied!
Interesting Articles
Illnesses and Treatment
Characteristics of Displaced Abomasum in Cows