Fungus Poisoning in Dogs: What Should I Do?

Even though the first symptoms might be quite mild, it's a good idea to go to a specialist as soon as possible. 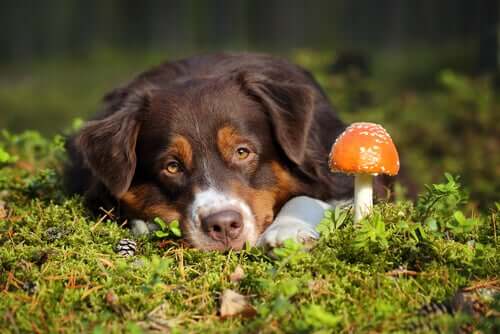 Fungus poisoning in dogs can happen whether you’re out in the country or in the home. As a result, it’s very important to pay attention to what your dog eats.

Mycotoxicosis is the set of diseases caused by mycotoxins, which are found in fungus or on a surface, substance, or food that has been contaminated.

Bread and fruit are the foods that are most likely to deteriorate, but dog food, and particularly wet dog food, also pose a risk.

When it comes to dogs ingesting fungus, it’s important to take great care. Although some types are harmless or will only cause light gastrointestinal problems, others can be fatal.

Symptoms of fungus poisoning in dogs

The severity and symptoms will depend on the type of fungus and how much they’ve ingested. However, there are a few general indicators that your dog might be poisoned:

Poisonous fungi can be classified into five categories depending on the symptoms they cause. Here they are in order of severity:

Fungus poisoning in dogs should always be treated by a specialist. Although the initial symptoms will be just gastrointestinal, they can get more complicated in just a few hours. Plus, even if the fungus itself is not highly poisonous, it can cause a lot of damage if your dog has ingested large amounts of it.

Some of the most common ways to get rid of the poison are to induce vomiting, pump the stomach, or feed them activated carbon.

In the case of liver problems, convulsions, or changes in heart rate or breathing, the first steps will be to stabilize their vital signs.

As for aftercare, your vet will possibly prescribe some medication with a specific diet and some rest. The 48 hours after suffering fungal poisoning are the most important, so your dog will need constant attention.

It’s not always easy to prevent poisoning. But you should still take every precaution you can when out in the country, parks or gardens, especially in the fall when it’s more humid.

Saltwater Poisoning: Is Sea Water Dangerous for Dogs?
Taking your dog to the beach may put them at risk of saltwater poisoning. It's important for owners to keep a close eye on their pets at all times. Read more »
Link copied!
Interesting Articles
Illnesses and Treatment
Treatments for Pulmonary Edema in Dogs