Narcolepsy in Dogs - Definition and Characteristics

Did your dog fall asleep while running or doing any other activity? You may not be aware of it but he could be afflicted by narcolepsy, a sleep disorder that also manifests in dogs. 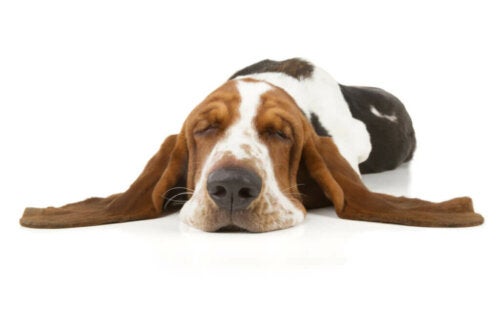 Imagine you’re out with your dog who’s energetically playing with other dogs. Then, suddenly, the little guy just drops on the ground. They kind of look like they’re taking a nap, just like they do at home. What happened though? It doesn’t seem like a heart attack … Could it be one of those dogs afflicted by narcolepsy?

OK but, don’t panic, narcolepsy isn’t lethal, after all. You do have to pay attention to it though. This nervous system disorder occurs primarily in young dogs or cats, as well as in humans. Read on to learn more about it!

An episode of narcolepsy in dogs

There’s a total collapse, as well as a loss of movement, during an episode of narcolepsy in an animal. The pet literally goes into a deep REM sleep — the phase in which the eyes move quickly and there’s no muscle movement.

The narcoleptic attack can happen when the dog is physically active as when they’re running. They wake up abruptly a few seconds or minutes later as if nothing happened.

Sometimes, narcolepsy is linked to another neurological disorder called cataplexy, which causes temporary paralysis of the muscles and loss of reflexes. Normally, a dog remains conscious of those around him and can easily wake up by physical or sound stimulation.

Narcolepsy in dogs is usually due to genetic or hereditary factors, although it can derive from other pathologies such as obesity and immune system disorders. Research related to this neurological disorder determined a neurotransmitter called hypocretin is the cause.

According to these studies, the normal regulation of sleep-wake cycles interrupts when there are abnormalities in the receptors of this neurotransmitter.

In addition, they identified the breeds that are more likely to experience a mutation in the gene that gives rise to these receptors. Labrador Retrievers, Poodles, Pinschers, and Dachshunds, among others.

The fact that a dog suddenly falls into a deep sleep isn’t a determining factor in diagnosing narcolepsy in them. Physicians must analyze other factors and follow up for a long time.

Ideally, performing a PCR to detect the mutated gene within the dog’s genome would quickly remove a vet’s doubts. However, this test isn’t available in every lab around the world and it’s quite pricey when it is.

Thus, the vet will most likely ask for a continuous follow-up of any supposed narcoleptic episodes suffered by the animal. They’ll need information such as:

The symptoms of narcolepsy in dogs can occur at the same time as other conditions such as heart disease, diabetes, or epilepsy. Thus, the vet might want to perform other types of blood, urine, and biochemical tests to rule out disease.

Is there a cure for narcolepsy in dogs?

Unfortunately, there’s still no specific, definitive cure for narcolepsy. However, determining the factors that lead to an episode can help prevent future ones.

For example, try to reduce or avoid playing with a ball or spending too much time in the park as much as possible if a dog usually experiences a narcoleptic episode after these actions.

As we said above, narcolepsy isn’t a serious disorder but a dog who suddenly drops down and falls asleep, and hits their head could lead to a veterinary emergency.

The most important thing to keep in mind when your dog has an episode of narcolepsy is they’re not in pain or discomfort. As you can see, an animal with this neurological disorder can still enjoy a decent quality of life.

Be attentive to the stimuli that make the dog fall asleep abruptly if you’re the owner of a dog with this condition.

Finally, keep in mind that you must avoid triggering situations and maintain periodic communication with your vet. This is because some studies revealed certain neuronal degeneration in the brains of some narcoleptic dogs.

Microorganisms that Cause Chronic Fatigue in Animals
Chronic fatigue syndrome is a disease that occurs in both people and animals. Below we’ll discuss the role of microorganisms in this disease further. Read more »
Link copied!
Interesting Articles
Illnesses and Treatment
What Are the Symptoms of Leukemia in Cats?