The Care and Diet of Diabetic Dogs

Diabetic dogs should recieve a flavorful diet that is nutritionally balanced and has a high insoluble fiber content. What's more, their diet should meet various other requirements, which we'll discuss in today's article. 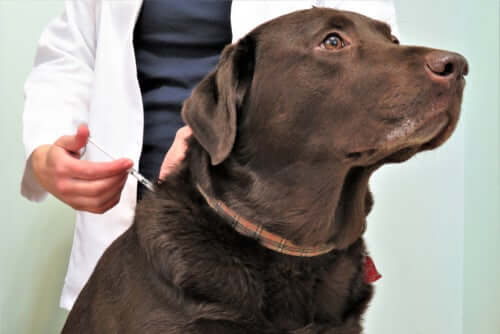 In diabetic dogs, the level of insulin they produce is insufficient to metabolize glucose. Remember that insulin is a hormone that takes glucose from the blood and transports it to the interior of the body’s cells. Here, the body uses it as energy.

As a result of insufficient insulin production, the concentration of glucose in an animal’s blood increases. On occasions, it can reach levels where the kidneys stop filtering urine.

The signs and symptoms that appear in diabetic dogs

It’s important to understand that in diabetes the loss of glucose in urine takes water with it. This occurs through a process called osmosis. As a result, the animal produces greater volumes of urine than usual. This excessive loss of water in the urine leads to thirst and a greater intake of water.

So, the first clinical signs of diabetes mellitus in animals are:

What’s more, diabetic dogs tend to lose weight because their bodies break down their fat and protein reserves–muscle–in order to produce glucose and ketones–an alternative combustion–in the liver. Furthermore, other clinical signs of diabetes can include diabetes, polyphagia (increased appetite), intolerance to exercise, and recurrent infections.

The objectives of therapy for canine diabetes

Essentially, as the owner of a dog with diabetes, you need to understand that there are three main objectives when it comes to treatment:

Why is it so important to control insulin-induced hypoglycemia?

Severe hypoglycemia (low blood sugar) resulting from an overdose of insulin can cause irreparable brain damage, blindness, convulsions, and death. The clinical signs of this condition include weakness, restlessness, heart palpitations, anorexia, and diarrhea.

Ideally, diabetic dogs should eat just before the moment when the activity of the insulin administered is expected to peak. So, pet owners should commit to feeding their diabetic dogs immediately after administering their insulin injections.

This practice will simplify your dog’s treatment regimen considerably at home. At the same time, it will allow you to maintain better glycemic control. What’s more, many owners prefer this method because it causes their dogs to feel rewarded for putting up with their injections.

Table 1. Summary of the dietary recommendations for diabetic dogs: