The Causes of Hepatic Lipidosis in Cats

Feline obesity is a determining factor in the occurrence of hepatic lipidosis in cats. Read the following article to learn more. 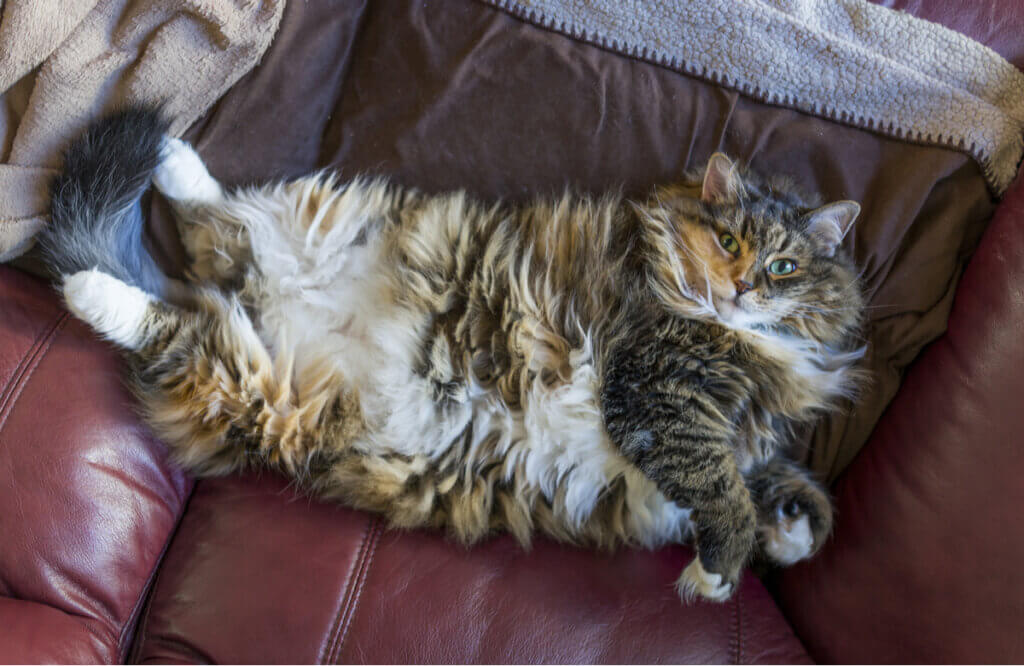 Feline hepatic lipidosis is a disease of the liver that arises when a massive excess of fats in the form of triglycerides accumulates in this organ. These lipids are concentrated inside the hepatocytes, which are the typical liver cells.

This results in intrahepatic cholestasis – a concentration of bile in the liver. It remains there instead of following its normal route to the duodenum, the first section of the small intestine. Without imminent and aggressive treatment, the cat dies due to liver failure.

A disease linked to sedentary lifestyles

At first, hepatic lipidosis in cats was described as a 100% idiopathic disease, i.e. appearing due to unknown causes. However, today we know that cats with an extremely sedentary lifestyle are at an increased risk of suffering from this syndrome.

When veterinarians suspect that a cat may be suffering from hepatic lipidosis, it’s essential to differentiate whether this is a consequence of another primary pathology. Or, if not, whether it’s a feline idiopathic hepatic lipidosis.

In 85 to 95% of cases, felines have a previous disease that causes lipidosis as a secondary disease.

Hepatic lipidosis is idiopathic when veterinarians are unable to determine the cause. In other words, they’ve found no other disease in the feline patient that could have caused it. Nevertheless, this syndrome generally appears in cats that are obese and under chronic stress.

Usually, episodes of stress in cats cause anorexia or a lack of appetite for food. This restriction of proteins and carbohydrates causes the mobilization of the animal’s lipid reserves to the liver. However, as there’s a protein deficiency, it’s impossible to transport the fat out of this organ, where it ends up accumulating.

For this reason, it’s extremely important to check that a cat is eating properly. First of all, monitoring the amount of food the cat consumes is crucial to avoid over or underfeeding. In addition, the quality of the diet is essential, as food with a high concentration of fats isn’t healthy for felines.

Finally, it’s important to encourage cats to exercise daily through play, a very important activity to maintain their physical and mental health. As we said, obese cats are more prone to suffer from hepatic lipidosis.

Feline diabetes as a cause of fatty liver

Diabetes mellitus in cats is a hormonal disease caused by insulin deficiency. Besides occurring in humans, this disease is also very common in felines with obesity.

Insulin, among other functions, stimulates an enzyme that promotes the storage of fatty acids in adipose tissue. When there’s not enough of this hormone, the fat remains free in the bloodstream. Then, through other mechanisms, it ends up accumulating in the liver, causing hepatic lipidosis.

Hepatic lipidosis due to pancreatitis

Pancreatitis is an inflammation of a specific region of the pancreas, namely the exocrine section. As a consequence, it causes the release of many enzymes, toxins, and other substances, causing severe pain in the cat.

This state causes the cat to stop eating, i.e. it causes severe anorexia. This is the main factor in abnormal lipid metabolism and the cause of hepatic lipidosis.

Hyperthyroidism and liver problems in cats

Occasionally, hepatic lipidosis can occur as a consequence of hyperthyroidism in cats. Although the mechanism isn’t well understood, experts believe that the reason lies in the problems having to do with weight loss and anorexia in cats with hyperthyroidism. In addition, excess thyroid hormone can cause liver toxicity.

The liver is an essential organ in animals’ overall metabolism. Many diseases, in their first stage – when they still have an easy solution – are detectable by means of a simple blood test. Therefore, it’s essential that owners make sure their veterinarian conducts a biochemical test on their cats at least once a year.

In the same way, obesity in cats – as in other animals – is a precursor of dozens of very harmful pathologies. Avoiding overfeeding and keeping your pet active are the key to ensuring that it remains by your side for many years.