What Are the Symptoms of Fever in Dogs?

Probably, all dog owners have suffered some episode of fever with their animal. With proper knowledge, it's easy to identify the symptoms of fever in dogs. 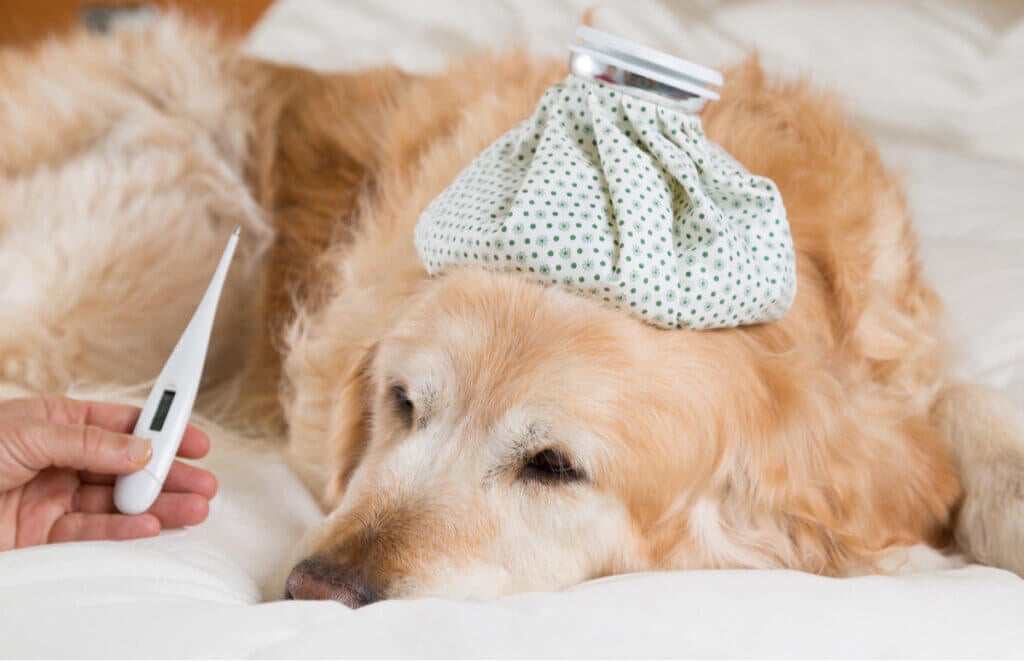 Fever in dogs is, without a doubt, the most frequent illnesses in veterinary clinics’ day to day work. It’s usually a sign of some sort of illness, either infectious or otherwise. Furthermore, fever carries a series of associated symptoms, which are quite characteristic.

Given the high frequency with which fever occurs in animals, it’s important to know the symptoms that this produces in their bodies. Keep reading if you want to know what the symptoms of fever in dogs are.

Fever, as we all know, has to do with body temperature. For that reason, to begin with, you should be aware of the normal body temperature of the species that we’re going to talk about today: dogs.

In dogs, veterinarians consider a temperature between 100.4 F and 102.2 degrees Fahrenheit to be normal. So, fever occurs when there’s an increase in this temperature. To be a bit more technical, we can define fever as a disorder of the thermal regulation that forces the animal to adapt to a temperature level that’s higher than normal.

Unlike hyperthermia, where the source of heat is exogenous and the regulatory mechanisms of body temperature – the hypothalamus – work properly, in fever there’s a change in these mechanisms.

When the hypothalamic thermostat is altered and 105.8 degrees is considered normal, then 102.2 degrees Fahrenheit (which would be the usual temperature) is interpreted as hypothermia. So, the body will work at a metabolic level to increase those degrees of difference.

Causes of the fever

Most of the causes of fever are usually septic and infectious, both localized and generalized. For example, an infected wound can produce this scenario. There are also non-infectious events that cause fever. We’re talking about the following:

The symptoms produced by the fever will depend, fundamentally, on two factors:

Symptoms of slight fever in dogs

Fortunately, this is the most common occurrence. On most occasions, fever in dogs that’s seen to in a consultation usually doesn’t exceed 104 degrees. What’s more, in some cases, this fever appears as a coincidental finding in a veterinary exam without the owner having perceived anything.

In these sick dogs, the following symptoms can be noticed:

When a dog’s body temperature exceeds 104 degrees, then we’re looking at a high fever or hyperpyrexia. In these cases, animals usually show more accentuated symptoms. Likewise, hyperpyrexia can endanger the dog’s life, so speedy treatment is necessary.

A dog with hyperpyrexia will show all or some of the following symptoms:

In general, these are the most common symptoms that produce fever in dogs. Despite these general guidelines, it’s necessary to emphasize that each animal is different. A dog may not show any symptoms at all, while another will be listless and with no energy for several days.

In cases of hyperpyrexia, the symptoms reveal that the dog’s life may be in danger, so a visit to the vet should be immediate. We hope that this advice will be useful to you in detecting the symptoms of this process in dogs early on.

Melanoma is the best known and most worrying type of skin cancer in the context of veterinary medicine. There are several types of skin tumors in cats that can affect…