How Does Old Age Affect Your Cat's Behavior?

Discover how your cat's behavior will change as it gets older. 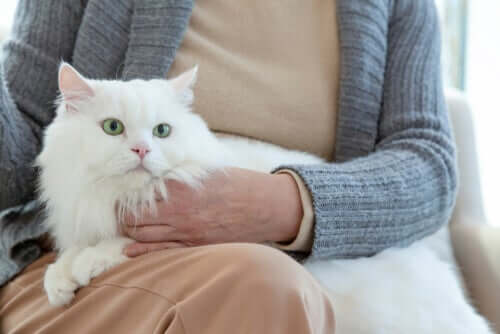 Like all animals, cats grow up and, as they get older, their behavior starts to change. These changes don’t necessarily lead to serious behavioral problems. In the majority of cases, they’re completely normal, and are no cause for concern. However, it’s important for owners to try to understand how old age can affect their cat’s behavior.

When it comes to making changes to your pet’s diet or their veterinary care, it’s important to pay attention to their age, rather than their appearance or behavior. For example, a 12-year-old cat may still be healthy and active, but it should still be treated as a senior.

Cognitive dysfunction syndrome isn’t the same as normal aging. An older cat may display notable changes in its behavior, but that doesn’t necessarily mean that those changes are caused by this syndrome. Cognitive dysfunction causes distinct anatomical and physiological changes in the brain, similar to those seen in humans suffering from Alzheimer’s disease.

Many of the behavioral changes brought on by old age are similar to those seen in cats with cognitive dysfunction syndrome, including:

Behavioral problems in senior cats may be the result of normal deterioration that occurs as the animal gets older. For example, a cat that urinates on the floor could be suffering from joint pain caused by arthritis, which may be preventing it from climbing in and out of the litter tray.

The appearance of aggressive behavior in cats can be a sign of discomfort, such as dental issues or a hormonal imbalance. If your cat appears anxious, it may be due to chronic renal disease, a condition common in older cats.

These behavioral changes can be early a warning sign that something’s not quite right with your pet, and can help your vet to detect an underlying illness early on.

According to a number of studies, older cats commonly display behavior such as:

Old age: how to take care of a senior cat

There are several ways you can minimize changes in your cat’s behavior, and help make their final years happy and comfortable. Firstly, you’ll need to book a veterinary check-up to rule out any potential health issues.

You may also want to adapt your home to make it more suitable for your senior cat. For example, if they have trouble getting into the litter box, try to find one with lower sides so that it’s easier for them to get in and out.

Similarly, if your cat is used to sleeping on the couch or bed, you could buy a small stool or ramp to allow them to get up and down. As your cat gets older, it’s best to avoid making big changes to their environment, as they can easily get disoriented. Make sure to keep the food and water bowls in their regular place, so that they know where to find them.

While they may be old, it’s important for senior cats to stay active. If they mainly eat a diet of kibble, be sure to choose one designed for older pets. Alternatively, if your cat likes wet food, this is the ideal time to increase their amount of wet food and decrease the amount of kibble in their diet. This is better for their kidneys, as long as you choose a good-quality brand, of course.

Senior Cat Diseases: What You Need to Know
Similarly to people, our pet's health begins to deteriorate as they grow older. In this article, we'll help you learn the most common senior cat diseases. Read more »
Link copied!
Interesting Articles
Senior
Gum Disease and Missing Teeth in Older Dogs