A Whale that Was Saved from Certain Death

Although cetacean stranding is common and linked to certain natural events, many times, it’s just bad luck. In this article, we tell you about a whale that was saved from certain death. 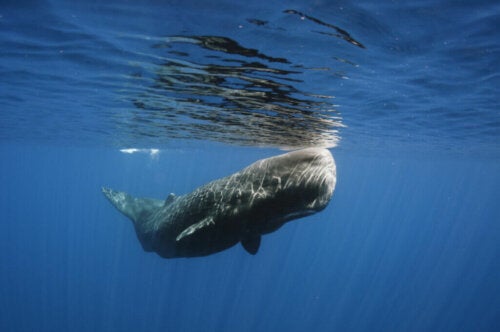 Cetacean stranding, also known as beaching, is becoming increasingly common. In most cases, the animals arrive dead on beaches. However, today we can tell you about a whale that was saved from certain death a few months ago off the coast of Hartlepool, England.

So, how was the minke whale, also called the common minke whale (Balaenoptera acuto-rostrata), saved? The fast and coordinated action of the local coastguard team and the British Divers Marine Life Rescue (BDMLR) was the key to successfully saving this whale.

The whale that was saved from certain death

Many marine animals come towards beaches for various reasons: food, warmer waters, disorientation, etc. Although most return to deeper waters, some simply can’t.

On the morning of August 2nd, approximately at 11 a.m., a minke whale at risk of beaching was spotted extremely close to the coast of Hartlepool. The coastguards who first spotted the animal alerted the British Divers Marine Life Rescue (BDMLR), who are rescue specialists.

While they made their way to the scene, the local coastguards themselves, along with a team of veterinarians specialized in marine mammals, stayed with the whale. Veterinarians ran a full check-up to make sure the whale could be released directly and didn’t have to go to a recovery center.

The BDMLR tried to keep the animal close to the coast to be able to monitor it and verify that its vital signs were optimal. The whale had other plans because, as soon as it could, it turned around and headed into deep water.

They managed to rescue it! If this didn’t happen, it’s very likely that the whale wouldn’t have been able to return to deep water due to fatigue or disorientation.

Why does cetacean stranding or beaching occur?

This is a phenomenon that occurs when whales strand themselves on beaches all over the world, on some more frequently than others due to migratory routes.

Although the main cause of the current problem of cetacean stranding or beaching is human activity, there are other reasons too.

When a whale is very sick or has already died, it’s easy for it to wash ashore due to currents and tides. The same thing happens to seriously injured animals, that can’t swim at will nor follow their group when they lose their strength.

On the other hand, sometimes they occur due to navigation problems. Whales, like other cetaceans, guide themselves thanks to echolocation.

After a strong storm or in shallow areas where the sand is so fine that it floats on the water, echolocation fails and the animal may become disoriented.

One of the most common problems is accidental entanglement with fishing nets, whether active or abandoned. This human waste can completely immobilize the whale or severely injure it.

The reasons why this whale that was saved off the coast of Hartlepool became stranded are unknown. Apparently, the animal wasn’t injured. Thus, experts believe it occurred due to disorientation.

Many countries strictly protect marine animals such as cetaceans, turtles, and sharks, among other species. If you were to, unfortunately, come across one of these animals, the first thing you’d need to do is notify the proper authorities.

While they make their way to the scene, you can try to keep the animal hydrated (if it’s a cetacean). Try to be as quiet as possible. In the case of reptiles, it’s best to monitor them from a safe distance.

You should never return the animal to the ocean. This is because it probably became stranded due to a problem, meaning it should be seen by a qualified veterinarian.

If you find a dead animal, then you shouldn’t touch it. Notify the authorities right away. The subsequent necropsy will offer a lot of essential data for monitoring the populations and their threats.

The case of the whale that was saved from certain death is a perfect example of exactly what should be done in the case of cetacean stranding. The authorities’ prompt, correct actions allowed this cetacean to be able to swim free again.

Sperm Whales – The Giants of the Ocean
Sperm whales are huge and the size of their brain exceeds that of any other creature on Earth. They can descend to almost 1,000 meters deep. Read more »
Link copied!
Interesting Articles
Responsibility
Suitable Pets or Prohibited Animals?