All About Migratory Animals

Many animal species migrate because of ecological pressures in their habitat which forces them to go to another habitat for part of the year to find new resources. 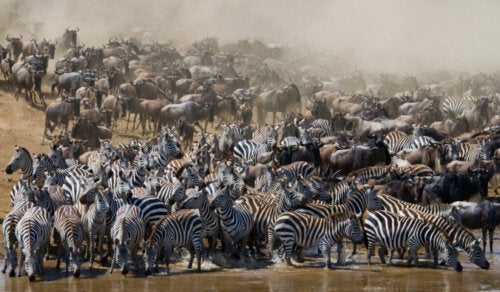 Every year, many migratory animals undertake a long journey to find new resources. They don’t all do it at the same time, but each species does have its own cycle which repeats each year.

Changes in space, weather, and the availability of resources are the main reason why animals migrate. The journey is often long and with many obstacles, and some animals may not survive. Read on to find out more about this incredible natural phenomenon.

Migration is a natural event whereby animals are instinctively driven to move to another habitat each year. This normally happens at the same time each year, and the new habitat could be many miles away.

This being said, not all animal movements are classed as migration. In order to be categorized as animal migration, the following criteria need to be met:

The aim of migrating is to find better resources or avoid adverse environmental conditions. The lack of resources in one habitat will force the animal to look for other places to find food. This could be influenced by environmental changes.

In general, migratory animals migrate in warm areas in autumn and return to their original habitat in the spring. Amazingly, their ability to navigate between their habitats seems to be in their genes.

Migratory animals that migrate every year

There are many different animals that migrate every year and they’re all fascinating. They face great danger along the way, but the risk is equally weighted against the resources that they’ll find in their new habitat. Let’s take a look at some examples.

The brave gnus of the Serengeti

The majority of the Gnus in the world live in the Serengeti National Park. From November to April, they feed in the south, where there are rich pastures. This is also where they raise their young until the supply of food begins to dry up.

Once the babies are three or four weeks old, the group beings to move and cross the dry and dangerous lands to the north. The journey is long and there are many threats. Just on the border between Tanzania and Kenya is the River Mara, where predators like Crocodiles await them.

The mortality of their young is very high, and only one in every six will survive. Up to 6,000 gnus can die every year during this migration journey. They finally reach their destination between July and October.

Adult gnus have a good visual memory and know exactly where they need to go. Two or three adult males guide the group on their journey towards more humid areas. These ‘leaders’ use the sun, visual references, their sense of smell, and the knowledge of the herd to guide them.

Whales migrate in search of a place to raise their young. When summer arrives, they can travel thousands of miles to areas where there’s an explosion of phytoplankton because of the abundance of sunlight. This increases the number of krill, the main source of food for whales and other predators.

This causes them to swim towards the coast instead of staying out to sea. The magnetic field can change, and for a while, these animals will be slightly disorientated.

There are many species of migratory birds and each one makes an annual journey that’s so accurate that it’s as if they have a map of the sky. The main flight paths are:

As you can see, animal migration is a veritable odyssey. Migratory animals can use up huge amounts of energy to travel this journey every year, and often, the journey is fraught with danger. It’s an instinctive behavior, although part of it is learned, and it’s passed on from generation to generation.

The Most Amazing Mass Migrations in the Animal Kingdom
There's a spectacular phenomenon that occurs in nature and stands out above all: mass migrations. Crossing entire oceans and continents is indeed admirable! Read more »
Link copied!
Interesting Articles
Mammals
Meet The American Black Bear: Characteristics and Habitat