The Danger of Crocodile-Infested Waters

Each year, between 800 and 1,000 people die after being attacked by crocodiles. Although they might seem slow, they can be highly dangerous. Although it's important to note that only 6 of the 23 subspecies are considered aggressive. 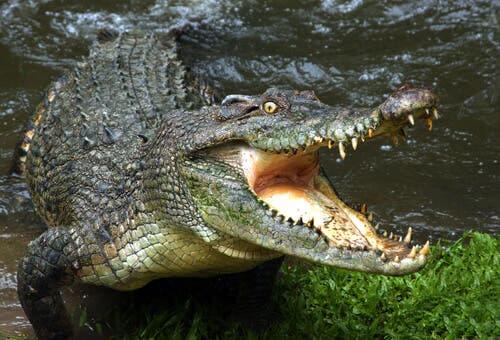 The relationship between crocodiles and humans has never been a friendly one. But are they really as dangerous as we think? Do you need to think twice before getting into crocodile-infested waters, like the Nile, for example? Read on to find out more.

Are crocodiles really that dangerous?

Of the 23 subspecies of crocodile, only six are actually considered to be dangerous. The main reason that people think that they’re dangerous is because of their large size and sharp teeth. But the smallest varieties can hardly hurt a human being.

The Nile crocodile and the saltwater crocodile are the two species best known for attacking humans. But this normally happens when humans arrive in their habitats in the wild.

However, hundreds of fatal attacks are recorded each year, and the Nile crocodile is the main culprit. Although, in the Solomon Islands and New Guinea, reports of attacks by the saltwater crocodile are quite common.

Although they’re less common, there are also cases of crocodile attacks in America. These include attacks by the American alligator and the Caiman, and several deaths are reported each year.

Caimans normally hunt small mammals. In fact, experts believe that they only attack human beings when they feel threatened.

And, although attacks are known by both crocodiles and alligators, it’s important to note that they exhibit very different behavior.

Despite belonging to the same family, the crocodile is usually much more aggressive than the alligator, partly due to its large size.

The relationship between crocodiles and man

So, are crocodiles dangerous? The answer is yes – if a human enters their habitat. In fact, these ferocious animals are the 10th most dangerous in the world.

Every year, around 800 to 1,000 people die after being attacked by crocodiles. However, a far greater number of crocodiles die after attacks by humans.

Changes to their habitat, as well as poaching, have had a significant impact on the size of the crocodile population. In fact, in 1992, the Siamese crocodile was in danger of extinction. But thanks to the efforts of various wildlife conservation organizations, this situation has been reversed.

There are many reasons why people hunt these animals. Genuine crocodile skin is used to make many garments and accessories such as wallets and shoes. These pieces are usually illegal.

Despite the fact that fewer and fewer people buy this type of product, crocodile poaching still continues.

As we mentioned, there are 23 crocodile subspecies, and experts consider than only six are dangerous for humans. The key factor is their size, as several studies have shown that the smallest species can’t kill a human being. At worst, they can hurt you, but if you get the right treatment, you shouldn’t suffer any lasting injury.

Despite being large and ferocious creatures, it’s important to remember that, if you respect their space, you shouldn’t have any problems. Attacks are unlikely to happen in populated areas, so the greatest risk is when there is close contact in the wild.

Another problem that has arisen in recent years is that some people have mistakenly believed that they can be domesticated. They can appear to be slow animals and, as a result, people try to feed them.

This recklessness has brought people close to death. It’s really important to remember that these are wild animals and they’re almost impossible to tame.

Ultimately, the answer to whether crocodiles are dangerous is very simple. These are wild animals that hunt for survival and kill to defend themselves. It’s really important to stay away from crocodile-infested waters and respect their space to avoid a deadly encounter.

Common sense and respect are key for maintaining a good relationship with any animal species, but particularly with dangerous ones like crocodiles. Admire them by all means, but remember to keep a safe distance.

Are Scorpions Dangerous? Eight Things You Should Know
Commonly, when people write about scorpions they mainly focus on how dangerous they are. The bad reputation attributed to them is totally undeserved. Read more »
Link copied!
Interesting Articles
Reptiles
Leatherback Sea Turtle Hatchlings: Why Do They Become Disoriented?