The Surprising Friendship Between a Man and a Crocodile

This heartwarming story is about a good-hearted fisherman that rescued a severely wounded, crocodile. As soon as the crocodile would fully recover, the fisherman's plan was to release the animal back to the wild. However, the animal was so grateful that the two of them developed an unbreakable bond. They even performed tricks together! 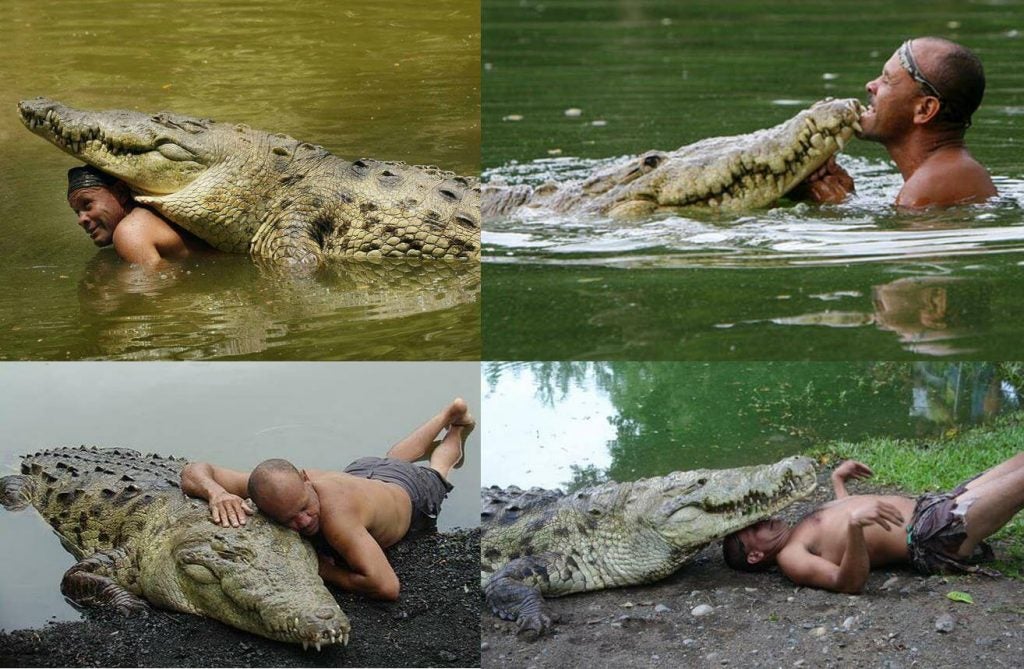 They say that there are species that aren’t meant to be together, especially human beings and many wild animals. However, there are stories proving that the opposite can happen too. The story in today’s article is about the friendship between a man and a crocodile.

This emotional and moving story stars a fisherman with a big heart and a large, but severely wounded, reptile. Once they helped the crocodile to heal, the plan was to release him into the wild. However, the animal was so grateful for his rescuer that the two of them developed an unbreakable bond. They even performed tricks together!

The Intriguing Friendship Between a Man and a Crocodile

Gilberto is a fisherman from Costa Rica whose life did a 360 degree turn when he found a wounded crocodile in a lagoon, who he later named Pocho. Sadly, a hunter had shot Pocho in the eye.

The man could not bear the thought of leaving the animal helpless to die alone. So, he decided to take Pocho home and take care of him until he was healed.

His plan was to release Pocho back into the wild once he was fully recovered. However, that is far from what ended up happening.

When Gilberto came home with the crocodile, you can just imagine the look of shock on his wife’s face. She was far from convinced about the idea of taking care of a crocodile. Nonetheless, Gilberto took care of it anyways. While Pocho was healing, Gilberto fed him raw chickens and slept next to him every night.

Gilberto said that “he wanted the Pocho to feel loved, and show him that not all humans are bad… That both humans and animals can live in harmony and in peace.”

Caring for a Crocodile

When Gilberto was feeding Pocho, he noticed the crocodile’s sweet glances and gestures of gratitude. At first, the animal was very thin and malnourished. But little by little, and with a lot of Gilberto’s love and care, the crocodile began to gain weight and recover.

His wife says that Pocho’s arrival was a well-kept secret and that she had no idea where her husband was going every night. She actually got to the point of thinking he was cheating on her!

No matter what, she says that the crocodile is a member of their family, even though she doesn’t get near him.

Once Pocho recovered, it was time for him to be brought back to the wild and Gilberto went ahead and did so. However, after leaving Pocho in the lagoon, he got out of the water and followed him home!

This happened several times until it became clear to Gilberto that Pocho wanted to be with him, and that he didn’t want to return to the solitude of the jungle. It was then that Gilberto decided to build an artificial lagoon in his yard for the animal.

His wife was not very happy. As time went by, she understood the friendship they had was thanks to Pocho’s gratitude. Then Gilberto came up with another plan: to train his new pet.

He began teaching him simple things, such as coming when he is called. Then he taught Pocho how to spin around, do somersaults and other acrobatic movements.

According to Gilberto, one-day Pocho looked at him as if to express that he wanted his friend to get in the water with him, and so he did. Gilberto says he never feared the crocodile, which he considered as a friend and family member.

It was not long until their story hit the news. Everyone was hearing about the incredible friendship between a man and a crocodile, who not only swam together but do all kinds of tricks. People started showing up to see them together until Gilberto and his wife realized they could turn it into a business.

There were tons of residents and tourists who came to see their show, but Gilberto was the only one who could swim with Pocho. He always warned his audiences that it was dangerous for the common person to try such a thing.

Some believe that the shot that wounded Pocho might have affected a specific part of his brain, causing the crocodile’s aggressive side to “deactivate”.

No matter what, this friendship between a man and a crocodile was real. Gilberto became the first known human to tame a crocodile, and even tried taming other crocodiles, as well. Pocho, unfortunately, died in 2007, but his and his friend’s story shall live on.