Koko The Gorilla, The Talking Ape, Has Died 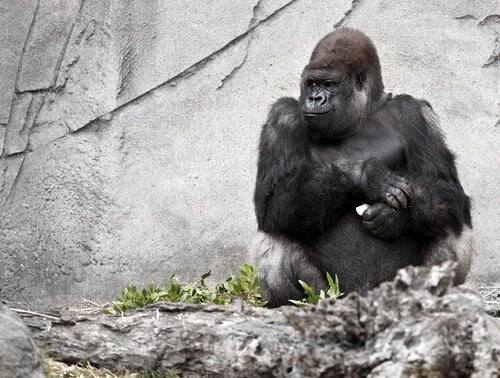 On June 20th, 2018, Koko the gorilla passed away. She was probably one of the most famous gorillas along with Snowflake. This female Western Lowland gorilla died at the age of 46 years old at The Gorilla Foundation, which was her home the last few years of her life.

Koko died while she was asleep, which brings comfort to the foundation, who will now probably be discontinuing their activity. The use of primates to study language has now been rejected for ethical reasons.

Koko the gorilla became famous due to her mastering sign language. Her carer and trainer, Francine Patterson, tuaght her more than 1,000 signs that Koko was capable of making. Also, she was able to understand at least 2,000 words of spoken English.

However, Koko’s abilities have sometimes been exaggerated. There is general agreement amongst the scientific community that Koko wasn’t able to construct sentences using syntax and her ability to communicate was similar to a four-year-old child.

In fact, Koko the gorilla went viral on multiple occasions. One such occasion was when she appeared in a video against global warming. Although touching, it was actually impossible for Koko to have an opinion on the causes and solutions of something that barely humans understand.

The Story of Koko the Gorilla

Koko was born at the San Francisco Zoo and was very sick during the first months of her life. Therefore, her carer had to take special care of her and they ended up establishing a strong emotional bond.

Later on, Francine managed to take Koko to a foundation where she would spend the rest of her life. Some people were critical about that decision. However, despite previously living in a zoo, at the foundation Koko had many other gorillas to interact with instead of just a single person.

A Life Full of Adventures

Koko was passionate about animals. On several occasions, she looked after cats and expressed her love for them by using sign language.

This female gorilla has met many people, such as Leonardo Di Caprio and even Robin Williams, a relationship which became famous after Koko’s reaction to his death.

Despite inspiring many people, there are many people who believe that the conditions that Koko grew up in constitute animal cruelty.

Non-human primates are easily humanized if they grew up with humans and this can make it impossible for them to re-integrate back to the wild in the future with other animals of their species. This is why you shouldn’t have a monkey as a pet.

Despite having lived with gorillas at various stages of her life, Koko hasn’t lived in natural groups. On many occasions has lived alone with only the company of human beings.

This is why some people believe that Koko would have been better off in the zoo where she was born, and where she could have been integrated with a group of her species.

Some people have been critical that language experiments with primates are still going on. Other cases have either been abandoned or ended up as animal experiments, and it’s been observed that most of these apes have psychological issues.

Certainly, Koko had a very different life in comparison to her counterparts. She inspired many people to respect nature, even if she didn’t have the best possible life herself.