Cat Saves Owner's Life By Biting Her to Wake Her Up

Read about some surprising and touching accounts of feline heroes below. 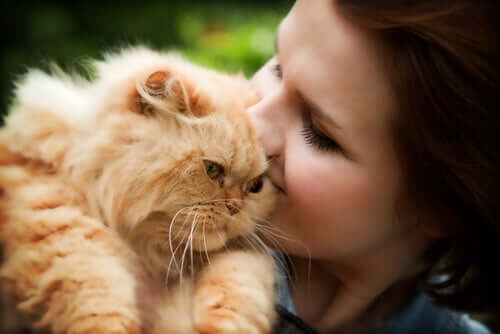 Animals seem to have a sixth sense that lets them know intuitively when danger is looming. We see evidence of this every now and then when we read or hear about news of some cat that saves its owner’s life from a fire, a dog that warned its master about an imminent heart attack, or a pet who knew that a robbery was about to happen.

In this article, you’ll learn the incredible story of a cat that saved its owner’s life by biting her to wake her up. You’ll also read about some other amazing stories of feline heroes.

This cat saves his owner’s life in a house fire

The owner of our hero lives with her family in the city of Clairmont in Canada. While she was sleeping, she started to feel that something was biting her. Her cat was trying to wake her up. The house was on fire and he was trying to alert her to the fact.

Incredible, right? The cat knew something was seriously wrong and was smart enough to wake up his owner!

Immediately the owner smelled burning and smoke in the home and went running to wake up the other members of her family. Everyone else was still sound asleep, including their other cat.

The good news is that everyone escaped unharmed from the house fire, and they were even able to save some of their belongings.

Without a doubt, their cat saved the lives of the entire household, including his own, thanks to his bravery and alertness in waking up his owner.

This feline really put his life on the line to save his friend, a little boy of just 3 years old. The mom of the little boy, Angelina Sipe, heard the noise of breaking glass, like something had entered the house through the window.

When she got to the living room, she saw that her little boy was asleep on the sofa. However the family cat (called Opie) had received a bullet in his side!

If Opie hadn’t covered the little boy, the child would have received the shot instead of him. The family immediately took the cat to the vet. He suggested euthanasia due to the extent of the wound. However, the family refused to euthanize.

Little by little, the kitty has recovered, although he will have to live with some after-effects of the bullet wound. For this family, Opie is a real hero.

This story took place in Obinsk, in the southern part of Moscow, Russia. A street cat, called Masha by the neighborhood, saved the life of a baby just 3 months old. The baby was abandoned by its mother and left beside a garbage can outside an apartment building.

At this spot, the building’s occupants had built a small cardboard box shelter for the street cat. When the cat found the baby in her box crying from the cold, she went and wrapped herself around him to keep him warm. Masha has a very thick coat, so she was able to save the baby from dying of exposure to the cold.

The cat stayed still next to the baby for hours, without budging an inch. When a neighbor finally saw them, Masha was licking the baby and warming him up using her body heat.

Before the baby was taken to the local hospital, his savior refused to leave his side. Masha was very worried about him. She only calmed down when the medics finally took him away in the ambulance.

A cat saves a boy from a dog attack

You’ve heard the saying that a dog is man’s best friend, right? Well, in this case it was a cat. It all happened in Bakersfield, California (United States), when a little boy was playing outside his house. Suddenly a huge dog appeared on the scene.

The little boy was riding his bicycle and was unexpectedly attacked by a dog. The canine grabbed him by the leg and started to pull him off the bike. At that moment, Tara, the family cat, saw what was happening. She launched herself onto the dog, claws flying, and the dog immediately took off running.

The family took the boy to hospital to get some stitches in his leg where the dog bit him. And Tara? She’s become something of a local hero, receiving awards and acclaims, but remains with her loving family despite her newfound fame.

Did you enjoy these stories about feline heroes? Cats can certainly be courageous creatures.

This Cat Helps His Owner Overcome Her Anxiety
Molly is a young girl who decided to adopt an ear-less cat. What she didn't realize is that this cat would help her more than any person. He helped her with her anxiety. Read more »

The Alhambra is one of the most emblematic monuments in Spain. It's centuries old, and the cradle of Arab culture.…