In Search of the Lost Dogs After the Beirut Explosion

Despite the terror experienced, the chaos, the human and animal lives lost, Leia continued to search for her lost dogs after the terrible explosion in Beirut. 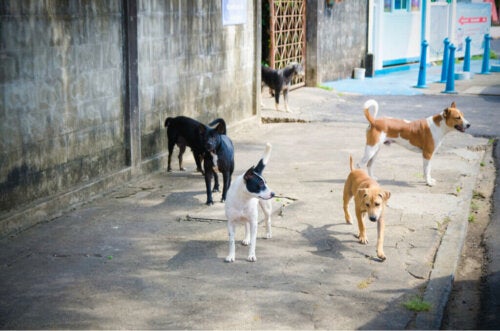 The consecutive devastating explosions in Beirut in early August left approximately 300,000 people homeless in the blink of an eye. Many families lost their loved ones, however this catastrophe affected not only people, but their pets as well. Today we’ll discover the incredible story of Leia and her dogs lost in the Beirut explosion.

After the disaster and the first minutes of confusion, all the neighbors tried to help each other. Amidst the chaos of broken glass, blood, smoke and despair, the community gathered to take refuge from what they initially thought to be another war like the one in 2006.

No one ever thought of abandoning their pets, but they were afraid and disorientated just like humans. Discover with us this story of effort and overcoming, which shows that an owner’s love for his dog knows no limits.

Moments after the explosion and Leia’s first thoughts

No one would have imagined what was stored in the port of Beirut. According to the Lebanese government, the cause of the explosions were 2,750 tons of ammonium nitrite. This compound is often used as a fertilizer, but also to create bombs.

The load was confiscated from a Russian ship in 2014 and stored in the port of Beirut. Even if senior customs officials tried to extract the nitrate from there and donate it to the Lebanese army, they never got the permits. Unfortunately, some welding work in the adjacent warehouse started a fire that ended in the terrible explosion.

This resulted in 135 victims killed on the spot, 5,000 missing and 300,000 displaced people. This last group includes the story of Leia and her dogs lost in the Beirut explosion.

According to Leia, a white light threw her into a corner of the room, and all she could see was broken glass and splintered wood. When she came to her senses, despite the ringing in her ears, her first thought was her family.

Not her biological family who was safe far from Beirut, but her adopted family. The first thing Leia thought of was her little furry ones that she had adopted in the past few years.

Someone came to what used to be her door and told her that her dogs were fine. So, she took her roommate, Lizzie, and headed for the exit amidst a sea of dangerously sharp debris.

Where are the dogs lost in the Beirut explosion?

Fearful of the possibility of another explosion and with the vivid memory of the 2006 Lebanon war, Leia and her neighbors took refuge under a staircase. To their surprise, there was Fred, the oldest of the dogs. But the little puppy Bunduq, who had come to Leia when its family abandoned it for fear of COVID-19, wasn’t there.

For the next few days, Fred stayed with its owner. It defended the ruins of what had been his home while they waited hopefully for Bunduq to find its way home.

For Leia, her adopted dogs give her a sense of stability in her life. They’re part of her home, her chosen family. As she says: “I didn’t choose my pets, they chose me.”

A social movement to find the lost dogs

Like Fred and Bunduq, many dogs were lost after the Beirut explosions. Thanks to a Whatsapp group Leia joined, called “dog mommy”, and by means of social media, all dogs were eventually found.

Unfortunately, Leia couldn’t go out to look for Bunduq. Her feet were severely injured by the blast, and she had to stay in the hospital for days. However, she didn’t stop publishing news about her dog’s disappearance and prayed that it would find its way home.

Meanwhile, her friends continued to walk the streets in search of Bunduq, placing posters and asking neighbors. Moreover, a local charity foundation that helps homeless animals, called for a search party for the dog. Unfortunately, there was no trace of it.

The days passed and Leia began to lose hope. Her lost dog could have been hit by a car, or perhaps it suffered terrible injuries from the explosion, which prevented it to return home.

One day, while Leia was blogging about the sniffer dogs that search for people under rubble, her cell phone display lit up showing a message: “Did you lose a dog? I think I have it.”

The person who contacted her had found Bunduq in Beirut after the explosion and took him to Tripoli, more than 50 kilometers away. His rescuer lost everything in the explosions and had to move. Despite this, he wasn’t going to leave a poor, frightened puppy abandoned. So, he didn’t think twice about it and put it in his car.

Another problem: how to get to him?

Leia didn’t have a car to get there, and she had to undergo several operations to heal all the cut tendons of her feet. To her surprise, an association called “The Animal Lovers of Lebanon” developed a plan to bring Bunduq back. So, the same day, at two o’clock in the morning, the puppy was back in Leia’s arms.

Stories like this, where a network of people work together for others by bringing back, in the arms of its family, a being that was lost and lonely, restore hope in human nature.

However, we can’t forget that Beirut is still destroyed. Many people were displaced and moved to the mountains or other cities in order to start again. The sanitary system is still not working at 100% after the war, but, in spite of everything, the inhabitants continue to help each other.