Is It Possible to Clone Dogs?

Lots of people wonder if it's possible to clone dogs nowadays. This is actually a very controversial topic, and we'll explain more in this article. 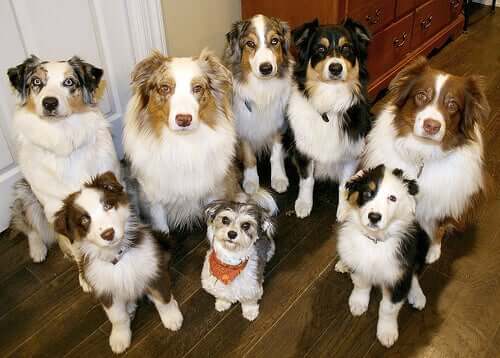 This question sparks a very controversial discussion nowadays. Whether or not we should clone dogs combines science with deep ethical questions. Here, we’ll talk about this question from all points of view.

Is it possible to clone dogs?

Scientifically, the answer is yes. But does this mean that society accepts it? Several researchers have dedicated their entire careers to studying the cloning process in different species. They did the first experiments with vegetables. In fact, this is a common technique in food production and reforestation.

Then, they adapted this method to test on animals. For example, there’s the world-famous case of Dolly the sheep. Since then, techniques have evolved, machinery has become more sophisticated, and experiments have moved from lab animals to pets.

Although commercial cloning is very controversial, it’s important not to limit our thoughts and think of unnecessary problems. The goal of cloning and genetic studies isn’t always about making money.

In fact, cloning can be an effective way to save endangered plant and animal species. Additionally, cloning can also help advance human and veterinary medicine.

What does it mean to clone dogs commercially?

Nowadays, some companies claim to have advanced technology to clone dogs. According to them, they can do this perfectly. This coined a new term: “commercial cloning.”

Commercial cloning offers owners the ability to clone their furry friends. The procedure can create one or more puppies with the same genetic characteristics as the original. In addition, they even look similar. Logically, this is very expensive, and it doesn’t guarantee the animal quality of life.

It’s important to clarify that not all scholars of cloning participate or collaborate with this. In fact, many of them don’t agree with using this technology to sell animals.

The ethical problem of cloning dogs

Selling cloned dogs has sparked lots of controversy among animal lovers, advocates, and professionals. In fact, genetically manipulating living beings has been a moral conversation for decades.

The first problem with cloning dogs for profit is that it treats animals’ lives as a type of merchandise. This starts the discussion that there are already lots of controversial practices regarding trading animals.

Surely, we could never think of doing this with people. Therefore, why should we clone dogs and other animals?

This confirms that there’s an ethical problem with a hierarchy of life forms. It’s the idea that there are different values of different types of life, where ours is better than others. Again, it talks about life as something with a dollar sign rather than a unique existence.

Cloning domestic animals also gives us the right to decide on life and death. In fact, this is one of the most controversial ethical discussions in human history. Is it up to man to make decisions that interfere with a living creature’s life cycle? This question isn’t easy to answer.

The importance of advancing with bioethics

The ethical basis is important in order to understand the limits we should impose. Without it, our thoughts and actions don’t have perspective and focus, and we ignore how important others are. In other words, to respect, consider and value others and their rights and responsibilities.

We need to recognize that bioethics need to evolve. They need to include current issues for human and animal lives. For example, not many people have even considered cloning people.

Surely, in the 90s this would sound crazy and far from reality. However, today, we’re already talking about the possibility of cloning dogs and other larger animals. It’s still difficult to find a serious and honest debate that tries to make society think about this problem.

Considering these advances in manipulating genetics, it’s clear that bioethics should focus on the possibility of living with cloned animals. It’s important to have a sincere debate that takes into account all perspectives.

Dog Cloning – Is It a Legal Business?
Today we'd like to discuss whether the dog cloning business is legal and ethical. To do so we must study the context in which it takes place.  Read more »
Link copied!
Interesting Articles
Dogs
Blue Dogs Suddenly Appear in a Russian City