Meet the dog who cared for orphaned chimpanzees 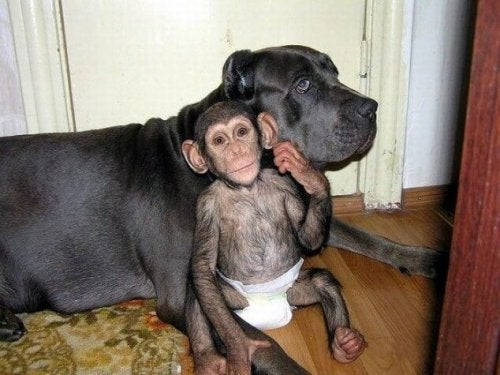 This is the story of Princess, a dog who at barely one year old narrowly escaped death. She was fortunate enough to be adopted by Jenny and Jimmy Desmond, a couple who works to rescue animals in different parts of the world. But this is also the story of how a little dog who knows a lot about love and second chances helps her owners comfort orphaned chimpanzees.

When the Desmonds moved to Liberia, Africa to help chimpanzees who had been left to die by the New York Blood Center (NYBC), their dog went with them. Jenny Desmond explains that animals need to be rehabilitated first. Then they try to introduce them back into their natural environment so that they can live with other members of their species.

This is where Princess came in. The pooch comforts the orphaned chimps, giving them her love, companionship and friendship. She helps prepare them to reintegrate into the habitat they really belong in.

Why the chimps were abandoned

The New York Blood Center recently turned its back on 66 chimpanzees that it used for research in Liberia. In the 1970’s, the NYBC had partnered with the Liberian Institute for Biomedical Research to obtain and mate the primates and use them in tests.

But despite the fact that the organization had committed to providing lifelong care for the chimpanzees, funding was withdrawn. In fact, it happened right in the middle of the Ebola outbreak that devastated the African country. So the animals were left homeless and without enough water, food or care. At last, organizations and volunteers came to their rescue.

One of the Desmonds’ big plans is to build a chimpanzee refuge in Liberia. They want to ensure that the animals get the attention they need. They also want them to be able to live with other rescued members of their species, rather than with humans.

For this, they depend on the help and support of organizations such as the Liberian Forest Development Authority. Plus, the have Princess. The pup and her endless love are there for the little orphaned chimpanzees.

Solidarity and friendship between animals of different species

When it comes to helping other creatures, animals seem to lack the pettiness of some humans. Every once in a while, we hear wonderful stories of friendship and solidarity between different species. For example:

And that’s not even mentioning the countless news stories about human babies or children protected by dogs or cats when they’re lost or abandoned. To sum up, the love of animals is profound — and lifesaving.