The scoring system of the Westminster Kennel Club lacks logic insofar as it requires dogs to have learned certain skills or abilities, when in fact most of them have been pets for a long time. 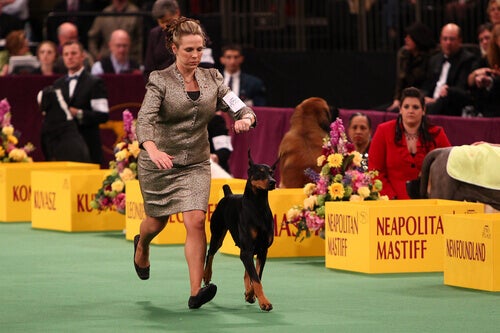 Some of the rules and customs that govern the world of canine beauty pageants can be most peculiar. One of the oldest and most popular shows is the Westminster Kennel Club. This is an annual event that’s been held in the United States since 1877.

Origins and operation of the most popular dog show

The Westminster Kennel Club dog show features each and every breed that the Fédération Cynologique Internationale recognizes. The name of the competition has little or nothing to do with England. Rather, in 1876, a group of wealthy men and hunting enthusiasts met at the Westminster Hotel to compare the abilities of their hunting dogs.

The way to determine the score of the animals is to follow the standards of the Fédération Cynologique Internationale. So, the competition rewards those that come closest to the perfect breed standard.


In its beginnings, the prizes that contestants won could be revolvers with a pearl-covered handle, which they could use in their hunts.

Today, the winning dog becomes ‘America’s dog’, which implies national tours and television contracts, among other things. The event takes place every year at Madison Square Garden. It lasts for three days in February and up to 2,800 dogs can compete. Only the 5 best dogs of each breed can participate.

Each of the breeds that the Fédération Cynologique Internationale and the American Kennel Club recognize has its own dossier, listing the characteristics that each dog must possess. In hunting dogs, for example, judges focus on musculature, agility, and the harmony of their bodies in relation to their limbs, etc.

One of the most notorious problems has to do with the capacities and abilities that judges look at. According to the judges, they must appear ‘innate’ in the animals simply because they belong to a certain breed.


These competitions, however, don’t take into account the fact that, nowadays, a great majority of these dogs live as pets. Therefore, centuries of domestic habits may have caused certain changes.

For example, we can mention the inbreeding tendency of breeders, who are more oriented towards economic profit than ethical breeding. This has led certain breeds to suffer a setback, both physically and mentally.

Bulldogs, for example, used to have a harmonious and strong body. But decades of inbreeding have produced a clumsy, drooling, and overweight animal. The Great Dane, with its majestic and aristocratic appearance, now suffers from the so-called Wobbler syndrome or cervical spondylomyelopathy (CSM). This encompasses several degenerative neuromotor disorders.

But that’s not all. We can also mention cosmetic surgery operations aimed at meeting the requirements that the judges of this type of competition demand. For example, the cutting of tails, the straightening of ears, and the correcting of other ‘defects’ with a scalpel, that could have otherwise led to the dog’s disqualification.

In our opinion, the economic and institutional support to these competitions only legitimizes a series of practices that violate basic animal rights.

Animal Rights and Protection Laws – Future Challenges
Despite all the progress, it's quite evident that there's still a long way to go before we have a society where animal rights and protection laws prevail. Read more »