Two Dogs Sniffing Out Superbugs in a Canadian Hospital

Hospitals are no longer a place just for humans. Dogs are being increasingly used to not only provide therapeutic help to and improve the well being of patients, but they are also working to sniff out hospital superbugs. 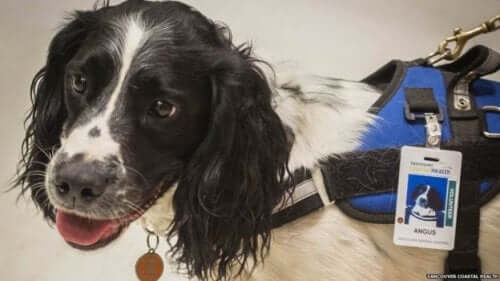 There are a growing number of dogs that support patients across the world. Dogs can help, not just by being therapy buddies, but also by helping to sniff out diseases. In this post, you can read all about two dogs that are sniffing out superbugs in a Canadian hospital.

Angus and Dodger, the dogs sniffing out superbugs

You might have already seen animals accompanying patients in hospital (mostly children with terminal illnesses). However, this story might surprise you. Two Springer Spaniels have used their hunting skills to sniff out the superbug Clostridium Difficile.

This microorganism attacks people with a weakened immune system. This is found quite frequently in hospitals and causes acute infectious diarrhea, which can be fatal. Both dogs received training over several months to allow them to detect the bacteria with just “a simple sniff”.

Two-year-old Angus has spent some time working in this hospital, where he has detected C. Difficile several times in different locations. One of the most interesting cases was on the trousers of a patient who came to the hospital with diarrhea. However, the patient was actually in the process of being discharged.

How do they sniff out superbugs?

How did we discover that dogs can detect this organism? Well, it was all by chance. A young woman from Vancouver, Teresa Zurberg, suffered a C. Difficile infection, which hospitalized her for 5 days. She lost 9kg in a week.

Her husband, a nurse in the same hospital, told her about an article he had read on a Beagle who received training to detect the same superbug in the Netherlands, and it had a real impact on him.

Teresa trains dogs to detect explosives and drugs, so she thought that the same could be done for C. Difficile. She presented the idea to the healthcare authorities, who then authorized a pilot test. Both the first and the second dog passed the trial with flying colors!

According to research, these bacteria are a common problem in hospitals on a global scale. They can also create a vicious circle, given that patients who have to spend more time in hospital are at an increased risk from infection.

This superbug lives in fecal matter and can remain in an environment even after cleaning. Health workers can spread the bacteria on their clothing or shoes. Ultraviolet light can usually detect it, however Angus and Dodger can do this much quicker.

The spaniels are now sniffing out superbugs after receiving 10 months of training. The project founder’s goal is for dogs around the world to receive training so that they can work in major hospitals. It has already expanded into other countries, including Chile and Finland.

The benefits that dogs can bring to hospitals

Beyond this project, there are thousands of dogs working in clinics, hospitals and rehabilitation centers. They are always made very welcome. The first health institution to allow a dog through its doors was the Sant Joan de Déu hospital in Esplugues de Llobregat, a municipality of Barcelona, Spain.

Other health centers have since copied this initiative, with amazing results. There are only a few areas of a hospital where animals are not allowed, including the ICU, surgical theaters and neonatal units. Everywhere else is free space, on the condition that hospital staff always accompany the animals.

Dogs can improve the well being of young patients, those who are suffering from a terminal illness, or those who are undergoing invasive treatment. Dogs can be very therapeutic. They can distract patients and alleviate the stress caused by a painful operation or procedure.

In some cases, dogs can help patients recover their mobility after surgery or a traumatic event. They can also establish long-lasting relationships with autistic children.

To be able to work in a hospital, a dog must be an “assistance” dog, which has received training for that purpose. They are also less likely to transmit other diseases to patients. Protocols ensure that the animals are always healthy and clean. The breeds used the most in health centers are Labradors and Golden Retrievers, given that they are very social animals.

How do Emergency Vet Services Work?
Different centers and clinics for pets have specialists who are available for emergencies 24 hours a day. Do you know how emergency vet services work? Read more »
Link copied!
Interesting Articles
Dogs
Blue Dogs Suddenly Appear in a Russian City