The fantastic conservation project run by Murray and his team has saved hundreds of elephants from poachers. 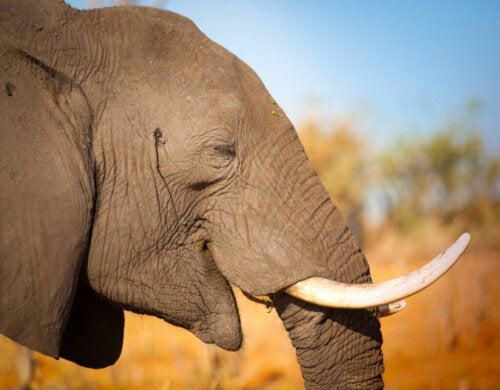 Welsh zoologist Nick Murray has dedicated his life to protecting elephants from poaching for more than 10 years. After much hard work and effort, he and his team have managed to stop many poachers of African elephants.

However, despite this success, with the coronavirus outbreak and the reduction in tourism, Nick is worried about the lives of the animals he has sought to protect for so many years. How have he and his team managed to prevent so many elephant deaths? Read on to find out more!

Nick Murray and his passion for wildlife

The zoologist Nick Murray studied at the University of South Africa. Ever since his early days at university, he has had a strong passion for wildlife. This is why, for more than 23 years, he has been a canoe guide along the River Zambezi in Zimbabwe.

As he told the BBC, he first became interested in zoology when his grandfather gave him a wildlife magazine.

Despite being passionate about wildlife, Murray’s concern for the conservation of elephants came about after he lived one of the most traumatic experiences of his life.

Some 10 years ago, Murray was guiding a group of tourists when a ghastly scene appeared before his very eyes: a group of 12 dead elephants next to a watering hole poisoned by poachers with cyanide.

Luckily, he was able to alert the park rangers, and in the end, 11 poachers were arrested and brought to justice. However, from that moment, Murray decided to dedicate his time to protecting elephants from poaching.

The elephants of the Mana Pools National Park

Since Murray arrived in Africa, the different elephant populations in Zimbabwe have reduced by almost half, from some 20,000 individuals to just 12,000 today.

According to official figures, 2008 and 2009 were the worst years. During this time, it became very common for poachers to use cyanide to poison the trees that the elephants fed on. However, when they found that this technique wasn’t effective enough, they started to poison water holes. This had devastating effects on both plant and animal life.

This horrific act doesn’t just kill elephants but all animals that drink from the water hole when the poachers are only interested in ivory. Furthermore, this attracts scavengers that feed on the bodies.

The significance of the ivory trade

The ivory that makes an elephant’s tusks can sell for a very high price on the black market. When there are low levels of tourism, some locals seek other ways to survive, and many take up poaching.

The increase in ecological tourism, safaris, and everything else that helps to preserve the wildlife in Africa also provides income to the local population.

However, in times of coronavirus and restriction of movement, many conservationists see the safety of elephants in many African national parks to be under threat. But, for now, thanks to elephant conservation projects, the fall in tourism has not led to an increase in poaching.

Along with his wife Desiree, Murray runs a large wildlife conservation project in Zimbabwe focusing on elephants.

The program, Bushlife Conservancy, is very complex and dangerous since it involves actively taking on poachers. These are people who, as well as killing animals, won’t think twice about doing away with anyone who stands in their way.

The most interesting part of the project is the monitoring of bull elephants. These are the biggest and strongest males, who tend to join and leave herds as they please. As a result, they run the highest risk. Furthermore, they have a tendency to leave the national park and enter areas where there are poachers. And these elephants are particularly prized because of their enormous tusks.

Since 2018, they have fitted nine bull elephants with GPS collars and, in 2020, they hope to fit five more. The problem is that this type of monitoring costs money. Each collar costs some $5,000, and the organization is funded solely by private donations.

Luckily, the work of Murray and his team grabbed the attention of Sir David Attenborough. In fact, Murray has even been a guide and advisor on Attenborough’s last two documentaries.

As well as protecting elephants from poaching, Bushlife Conservancy runs conversation projects to protect other animals. These include the African Wild Dog and the pangolin, both of which are seriously under threat.

Thanks to projects like Murray’s, wildlife in Africa can have a second chance in a world that previously seemed destined to cause them nothing but suffering.

Do Animals Have Emotions?
Any pet guardian would easily state that their animals have emotions. Every one of them has a different personality and science agrees on it. Read more »
Link copied!
Interesting Articles
Wild Animals
The 5 Ugliest Animals in the World