The 5 Sleepiest Animals in the Animal Kingdom

These species are characterized by a sleep schedule that can reach nearly 24 hours. Discover the 5 sleepiest animals in the animal kingdom. 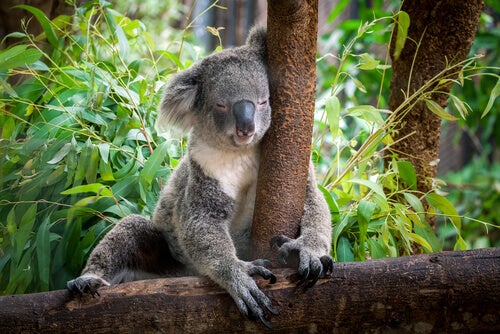 Humans get about eight hours of rest each night. Some more, some less–but if you compare us to the world’s sleepiest animals, that’s almost nothing! In the following article, we’ll tell you all about these animal species that spend almost the whole day sleeping.

If there were a contest among the sleepiest animals, the winners would be these five species, as they sleep most of the day!

If you’re on vacation in Australia and you see a koala with its eyes open, consider yourself lucky! These adorable looking gray marsupials spend 20 to 22 hours a day sleeping.

The rest of the time they gobble and gobble up their food – eucalyptus leaves make up their diet. Since these contain a lot of water, they don’t need to drink extra fluids… More time to sleep! They do it directly on the branch where they were eating and without making a nest or a shelter. Wherever they are when they feel like sleeping, that’s where they’ll stay.

In second place in the ranking of the sleepiest animals appears this placental mammal that inhabits the humid forests of Latin America. And if you thought the sloth was related to the primates, we’ve got news for you. It’s actually a distant cousin of the anteater.

Its life consists of two things: eating and sleeping. For the first, they choose buds, shoots, and leaves from Cecropia trees. And, for the second, they ‘hug’ a branch, using their strong claws and long legs, where they remain in that state… for 18 hours!

They don’t move very fast due to their metabolism and because their diet doesn’t provide them with much energy and nutrients.

We all know that bats sleep during the day and come out at night… But this little one also rests when the sun goes down! In total, the little brown bat takes a long 19-hour nap every day.


These winged mammals inhabit caves and woodlands in North America and in certain areas of Alaska. They’re very common in the United States, live about seven years, and hibernate all winter… That’s right, they can go for three months in a row without waking up!

The armadillo is a cingulate mammal from the tropical forests of South America, and its body is protected with a shell or armor, hence the name armadillo.

Although they sleep about 18 hours a day inside their burrows, they’re very active during the remaining 6 nocturnal hours. In fact, they can walk for miles to find food, especially termites, ants, worms, spiders, and caterpillars.

This sleepy attitude is one of the main reasons why it is in danger of extinction. Because it’s so peaceful and doesn’t stay alert, it’s easy to hunt it to use as an ornamental shell or sell it to animal collectors.

The last creature on our list of the 5 sleepiest animals is this marsupial mammal native to the entire American continent. The opossum spends 18 hours a day sleeping and the rest of the time it eats and moves very clumsily and slowly.


Opossums feed on insects and plants and climb on trees thanks to their powerful claws. They’re very solitary animals. In fact, females are only accompanied by their offspring during the months when they can’t fend for themselves

Why Do Cats Sleep so Much?
If you're a cat owner, you've probably asked yourself: why do cats sleep so much? People are surprised to see their pets resting all day.  Read more »
Link copied!
Interesting Articles
Wild Animals
5 Species in Critical Danger of Extinction