What Are Wildlife Crossings?

They're the most effective solution found to date providing passage for animals. Thus the habitat or ecosystem of some species is protected, and it also prevents numerous accidents on roads and highways. 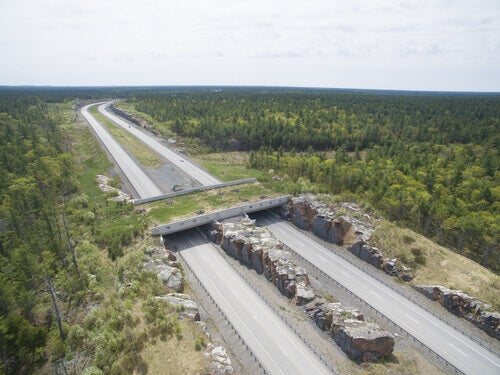 We live in a world connected by highways, railroads and roads that cut the routes of wildlife throughout the planet. Wildlife crossings are a proposed solution to the separation that we created between wild animals and human activity.

What are wildlife crossings?

Along the roads of most countries in the world, well disguised for the occasional traveler, there are the so-called wildlife crossings. Normally, wildlife crossings come in the shape of bridges or tunnels, covered in such a manner that animals and people can’t see each other. These bridges have a natural substrate enabling animals to cross these human roads.

There are also tunnels that pass under highways or in areas where air and sea activities are restricted. Some cities are even considering the use of wild plants to attract wild bees in order to pollinate the city.

Some wildlife crossings are very picturesque, and even have trees and artificial lakes. Therefore, animals tend to carry out daily activities and use them as a natural passage.

Others are tiny and have very peculiar structures. Recently, a wildlife crossing was opened for a species of tamarin monkey. This crossing is a suspension bridge across a Colombian road.

Habitat loss is one of the greatest threats to endangered animals. However, the habitat doesn’t disappear all at once, as we imagine. Normally, human activity gradually takes over different sections of the same ecosystem, until these areas end up isolated from one another.

Once the fragmentation of the ecosystem isolates animal populations, the loss is twofold. On the one hand, human activity reduces the habitat, which suddenly ends up isolated. On the other hand, ecosystem fragmentation prevents animals from accessing other areas that aren’t yet exploited by man, but which have been isolated.

The importance of genetic exchange and wildlife crossings

It’s true that habitat fragmentation causes other problems for these species. For example, human activities cause wild animal populations to separate, which renders them unable to reproduce.

Genetic exchange is one of the greatest means for a species to maintain an optimal health state. Species that have little genetic variability, such as the Iberian lynx, the mountain gorilla or the cheetah, are very vulnerable to disease and climate change.

Wildlife crossings facilitate the connection between areas separated by human activity such as roads. This allows different populations to exchange individuals and interact, as well as to seek resources and recover their territories.

Wildlife crossings can also be done in great style like the so-called ecological corridors. Some projects plan to cross half of Europe or different countries surrounding the Himalayas. These ecological corridors would benefit animal populations that have been isolated by hundreds of kilometers, as is the case of the Sierra Morena wolves.

A solution to accidents

Even without wildlife crossings, animals will always try to move through their original territory in search of mates, food or water. That’s why accidents are the main cause of death of many land animals, especially those that require a large amount of territory, such as large carnivores.

An example is the Iberian lynx with multiple accident blackspots on the southern Spain roads, where dozens of lynxes have died in recent years. There are even specific signs to indicate the passage of lynxes, so that people moderate their speed.

The truth is that wildlife crossings can’t be placed just anywhere. For instance, on secondary roads, many species won’t take detours to use a safe passage because most animals haven’t experienced an accident and are unaware of the danger.

Wildlife crossings are a great tool to mitigate the impact on wild animals, however we should drive with caution in natural areas. Finally, in case of running over a wild animal you must contact a rescue center.

The Golden Lion Tamarin: Between Threats and Benefactors
The golden lion tamarin has suffered a series of influences that have almost caused its extinction. To learn more about this species, read on. Read more »
Link copied!
Interesting Articles
Wild Animals
The 5 Sleepiest Animals in the Animal Kingdom