Pet Reflection: My Best Friend is My Dog

Do you consider your dog your best friend? 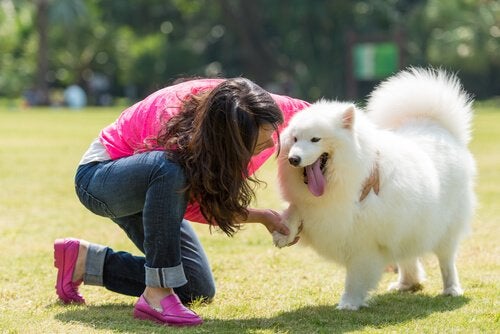 Maybe you also adhere to the phrase “the more I know men, the more I love my dog.” Some human beings give ample reason to prefer dogs. Among those reasons is the abusive way they often treat animals. However, it is also true that these expressions can lose their meaning when we repeat them so often.

Where did the phrase “A dog is a man’s best friend” come from?

But what is the origin of the saying “a dog is a man’s best friend”? Many believe that this is an anonymous expression that spread by word of mouth over the years. However, someone actually said it during a trial held in Missouri, USA, in 1870.

Attorney George Graham Vest used these words as his final plea. He had been hired by a person whose dog, named Old Drum, had been killed by a neighboring farmer. His speech, which was called “Eulogy on the Dog”, contains many of the arguments that people use today to explain why they consider dogs to be man’s best friend.

The truth is that the lawyer was so convincing with his story that he managed to convict the murderer of Old Drum to pay a fine of 550 dollars, instead of the $150 that stipulated the law for this type of action. But also, a statue of the dog was erected in front of the Missouri Supreme Court building, where the lawyer’s speech can be read.

A friendship that has come a long way

Dogs have been accompanying man for 40,000 years, as the latest scientific findings seem to indicate. A lot of time has passed since the first wolves were domesticated to the present day. Humans use and abuse dogs for both noble and despicable activities. The list is long and there’s no need to get into that here.

One day, we discovered that these animals were also great as pets. Thus they became part of our families in a relationship that often makes us say that they are our best friends. There are a number of reasons for this. For example:

Dogs and humans as friends

Not to contradict, but instead to reflect, we think that to say a good friend should not judge or question sounds quite self-indulgent. A dog may give us his affection even when we know that we made a serious mistake. Ideally, a faithful and great human friend will help us see what we did wrong and how to repair the damage.

Perhaps the fact that dogs don’t hold grudges has to do with the way a dog remembers things. But in no way does that give us the right to abuse him. What kind of friendship would that be if we allow ourselves to treat someone badly just because they are not spiteful?

Beyond all this, we should not forget that while dogs can be a great friends, we must never make the mistake of humanizing them. You shouldn’t believe that friendship with a dog can replace human relationships. If we come to that, not only are we doing ourselves harm, but to the animal as well, as much as we say we love him.

The scientific explanation behind the loving relationship between man and dogs

According to the results of different studies, the secret of the close relationship between humans and dogs is said to be a substance called oxytocin.

Commonly called the “love hormone”, oxytocin is present in all mammals and is related to bonding, among other things. It is the substance that is present in the brains of dogs and people every time they look into each other’s eyes.

It’s great that your dog is your best non-human friend. But never forget to put George Graham Vest’s famous phrase to action.
Link copied!
Interesting Articles
Tips and Curiosities
The Best Food for Dogs with Arthrosis