The food of these birds is very specific. Thus, deviating from it involves serious risks for the health of the animal, up to the point where it can cause death. 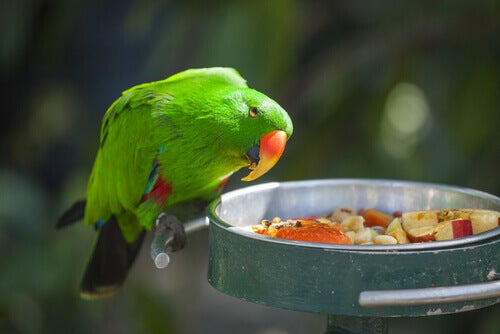 A parrot’s diet is one of the most important aspects to consider when keeping this bird as a pet. There are many foods forbidden to parrots that we must take into account when preparing their complicated rations. Otherwise, we run the risk of intoxicating them.

What do parrots eat?

As a general rule, parrots should eat feed that’s specific for them, along with fresh fruit and seeds to enrich their diet. Having said this, we must turn to professionals and not experiment with foods that can intoxicate these birds. Let’s review a parrot’s diet before talking about forbidden foods:

A varied and balanced diet, free of foods forbidden to parrots, is undoubtedly the most beneficial. It’s probably best to base the diet on high-quality kibble foods in a proportion of at least 50% of the diet.

As for the above-mentioned fruit and vegetables, these should be varied. Also, the recommendation is to give these to your pet every day in a proportion of between 20% and 40% of the diet.

Finally, seed mixtures and legumes can enrich the diet, but they should be given occasionally. Even dairy products without salt or a lot of sugar can be a good way to enrich the bird’s diet.

We always recommend that, in order to satisfy the ethological needs of these animals, their diet shouldn’t be available in hoppers, but rather in environmental enrichment devices for companion parrots.

Of course, most processed foods that people consume are among the foods forbidden to parrots. In this sense, the above is the correct diet as almost anything that deviates from it is detrimental to these birds.

Among fruits, we could highlight the avocado as one of the important foods forbidden to parrots. It has an element called persin, which causes cardiorespiratory failure. Another dangerous fruit is the watermelon due to its high glycoalkaloid content.

The eggplant and certain tubers, such as potatoes, contain solanine, which is toxic for most animal species. Even after cooking, these vegetables lose the toxin, and it’s better to avoid giving it to the bird in either form. Garlic and onion can generate quite strong anemia in most animal species. That’s why they belong on the list of forbidden foods.

The consumption of fruit seeds is inadvisable, as many contain cyanide, even if not in high doses. Even if citrus fruits are sometimes on the list of foods forbidden to parrots, these birds can digest them well enough. However, their abuse can cause mild diarrhea.

Other foods forbidden to parrots

Parrots can’t digest honey, as it alters the intestinal microbiota and causes an inflammation of the stomach known as gastritis.

Coffee and tea are part of the foods forbidden to parrots, due to their high content of caffeine and theine. These components produce hyperactivity in parrots, which may lead to heart problems.

Another toxin is chocolate, the great poison for dogs and many other animals, including these birds. Theobromine stimulates the nervous system and can cause convulsions, vomiting, diarrhea, and death. We should never give chocolate to any animal. Further, its ingestion requires immediate veterinary attention.

Even if obvious, alcohol, salt or feed for dogs and cats are forbidden foods for parrots, and you should never give them to your pet, not even occasionally.

Be careful with these foods forbidden to parrots when preparing your pet’s diet, as they can endanger its health and well-being.

Parrot Care in Winter
Parrots are popular pets because of their natural beauty and ability to speak. They're used to tropical climates, so parrot care in winter is very specific. Read more »
Link copied!
Interesting Articles
Other Animals
The Strangest and Most Beautiful Animal Friendships