When we think of dogs, we think of happy animals that are always wagging their tails. So we want to know, do grumpy dogs exist? 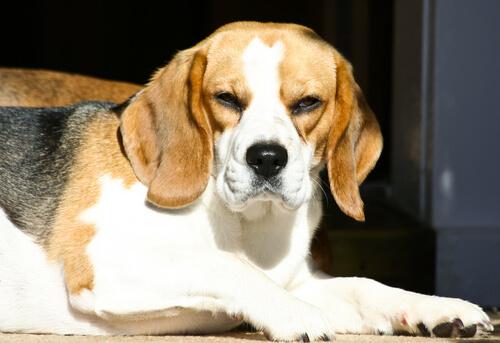 Although the vast majority of dogs are constantly wagging their tails, you get some who are grumpy dogs that are always in a ‘bad mood.’

This mood can be the result of diseases that are causing the dog discomfort or pain. The first thing you should do is rule out any health problems. If that’s not the cause, the reason could be fear, insecurity, a need to defend his territory, food, or his owners.

One of the factors that could influence our dog’s mood is our attitude towards him. If we don’t let anyone approach him or pet him, and if we don’t take him out for walks or play with him, then he’s going to end up with a grumpy personality.

Aggressive dogs can be treated by means of rehabilitation. If his behavior is due to something that he doesn’t like or that he’s afraid of, you should help him understand that it won’t hurt him nor will it pose a threat to him. If this attitude is towards a human, you should socialize him little by little.

You’ll need to understand the body language of grumpy dogs and teach them to socialize with other dogs. Growling is also a way that dogs use to communicate with one another. It indicates possession or that they’re defending something.

In any case, the solution is never to isolate the animal from other people or pets. Instead, you should encourage interaction, supervising it at the same time.

Some guidelines for grumpy dogs

Signs that a dog is grumpy

These signs may indicate that the dog is suffering from pain or discomfort, which may be causing his change in behavior. Dysplasia, back problems, and other ailments are much more common than we think.

There are other signs that aren’t as easy to pick up on. Generally, they are dogs that were once affectionate and confident, but now get scared, and are distrustful and disobedient, even with family members. However, this type of behavior may also be a sign of hearing loss.

There are also cases of calm dogs that are attacked by other dogs for no reason. They may suffer from back or other problems that give them a rigid appearance. Other dogs may perceive this as an aggressive stance.

What we know about grumpy dogs

As you can see, there are dogs that tend to be more grumpy towards people, or that act badly around other dogs and even people. This could be the result of poor socialization, bad training by the owners or, sometimes, the animal’s own character.

Some owners respond nervously and avoid negative encounters with their pets. However, when there isn’t any real medical problem to justify their impulsivity or aggressiveness, then we’ll have to work through this with our dog. We want to make sure he can enjoy life in society.

It’s essential that you understand his body language so that you can differentiate between what is a game and what is aggressive behavior.

When your dog is a puppy, it’s normal for him to growl, show his teeth and even play bite you, so lightly that it doesn’t hurt. However, when they become adults, we have to make sure we put a stop to this behavior, as it will prevent them from socializing with other dogs.

Aggressive, Overprotected Dogs
Treating your pet like a human can lead to your pet becoming overprotected and aggressive. Learn more about how to prevent aggression in overprotected dogs. Read more »
Link copied!
Interesting Articles
Behavioral Problems
More Than 72% of Dogs Suffer from Anxiety