Is it Possible to Stimulate a Dog's Intelligence?

Did you know that it's possible to stimulate a dog's intelligence through the use of games and interactive activities? Discover more in today's article. 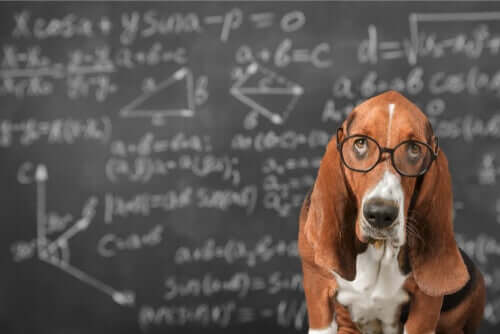 We know that dogs are animals capable of learning and memorizing a number of different things. This includes not only their names and simple commands, but also how to solve somewhat complicated mental puzzles. Now, the question is, is it possible to stimulate a dog’s intelligence?

The answer is yes, it’s possible. So now you’re asking yourself, how do you go about it? Don’t worry, we’ll tell you all you need to know in the following article.

How intelligent are dogs?

A variety of studies regarding this question have been conducted using specimens of different dog breeds. The findings indicate that, on average, a dog’s intelligence is similar to that of a child at the age of 2.

Canines can learn signs, gestures, and an average of about 165 words. What’s more, it’s worth mentioning that the smartest of dogs have managed to learn up to 250 words in all.

There are a number of ways to measure intelligence, including language, arithmetics, social intelligence… And all of these show very positive results when it comes to dogs.

According to Coren, dogs have a very basic understanding of arithmetic and can count up to four or five.

In one of the mathematical tests, researchers show dogs a piece of food, and then a second piece. If the dog understands the concept of 1 + 1, then when it has the opportunity to search for its prize, it will look for two pieces. In the same way, some dogs were able to count up to four or five.

Another type of canine intelligence has to do with spatial resolution. Dogs are able to study their environment and locate valuable items like food, toys, and their favorite spot for sleeping. And what’s even more interesting is that they do so by finding the quickest route, overcoming obstacles in their way. For example, by opening doors or finding an opening where they can go from one place to another.

However, the most impressive ability in dogs is that of recognizing and understanding human expressions. And, in consequence, being able to communicate.

All of these cognitive abilities make animals very intelligent and social animals.

How can I stimulate my dog’s intelligence?

In order to stimulate a dog’s intelligence, we must reduce stress levels, prevent boredom, and improve the owner-pet bond. Some of the activities you can use to stimulate canine intelligence are the following:

In conclusion, the way to stimulate canine intelligence is by playing with your dog and including your pet in interactive activities. As owners, we need to be sure to keep this in mind and not allow too much time to go by between one game session and another.

Dogs that play with their owners regularly can be much more intelligent than dogs that hardly ever get the chance to do so.

No, Cats Are Not Smarter Than Dogs
Are dogs smarter than cats? Apparently, science now has an answer. Below you can read about the outcome of one of the biggest controversies in the history of the pets. Read more »
Link copied!
Interesting Articles
Fun and Games
Winter's Here! Enjoy the Snow With Your Dog

If you want to encourage your cat to play, you'll need to watch it closely. Start by gradually introducing a…

Some dog parks have signs displaying the rules for the park. However, there are lots of other rules for dog…