How to Read Your Dog's Body Language

It may seem easy to interpret your best furry friend but dogs' body language is complex, even after so many years of living with them. Here are some tips every owner should know. 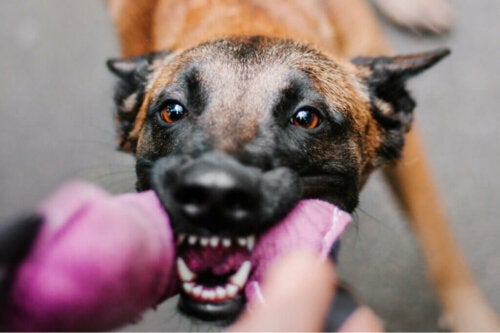 You can certainly read your dog’s body language when they make that super cute face. You probably also know exactly when they’re sad. Beware though, there are times when things aren’t what they seem.

The following lines are a review of the main characteristics of the gestures and postures that dogs adapt to in different situations. For sure some of them will be useful, so check them out.

You must begin by separately analyzing each part of the animal’s body. Normally, they reveal attitudes with the whole body, but, due to individual differences in each dog – such as mutilated ones, it’s important to know where else to look to identify these.

This is the part of the body that humans look at the most to interpret an animal’s mood. Tail wagging is generally identified as joy, although it isn’t so easy to guess emotions based on this.

Other movements of the tail are:

The ears, in harmony with the rest of the face, can be quite expressive in conveying moods. However, you may observe the following when looking at each one of them separately:

Since the morphology of the ears varies greatly from dog to dog, the best way to know where each of their ears is pointing is to look at its base. This is particularly useful for dogs with large, droopy ears.

This is another of the most expressive facial elements in dog body language. Who doesn’t realize there’s danger when canines bare their teeth? Here are the most common dog mouth gestures:

The eyes in a dog’s body language

There are two elements to take into account when analyzing a dog’s eyes. The first is how wide they are and what they’re looking at. The more open wide, the greater the tension. The dog is experiencing fear or terror if you can actually see the sclera. Conversely, their eyes will be narrow when they’re relaxed.

A fixed gaze can mean alertness, a hunting attitude, or a threat. They’ll show the opposite, such as insecurity or fear, by looking away. This doesn’t mean they won’t look at those who are frightening, but they’ll do so from the corner of their eye and with quick glances.

The animal’s general posture is sometimes easy to misinterpret. Thus, it’s necessary to read it along with the signals from the rest of their body. This is because they have a position for every emotion — it’s the basis of body language in dogs.

Generally, the straighter the dog is, the safer they’re feeling. This has to do with dominance. A dog who crouches down or even gets on their belly is showing submission. They do it to inhibit aggression from other dogs.

Other interesting signals are:

The body language of dogs – signs of calm

By way of conclusion, pay attention to how your canine companion displays certain attitudes and emotions in general. To do this you must know the calming signals — a series of movements and gestures aimed at avoiding conflict. Some of them, like the submissive postures you read about above, are obvious, but others aren’t as much.

In general, a dog who’s uncomfortable with the situation may avert their gaze, turn their head away when they try to sniff their face, lick their muzzle quickly and repeatedly, yawn, and adopt a stiff posture, among other things. Ignoring these signals can trigger an aggressive response, so it’s important to be aware of them.

As you can see, your dog might display several body signals. Are you familiar with all of them? A good understanding leads to good coexistence and the possibility of experiencing many good times with your dog.

Learn About Your Dog’s Moods Through Body Language
Body Language or body postures is a skill that has been used from long ago. The purpose is to understand certain attitudes and feelings, either in animals or in people. What about dogs? Find out more about this article here. Read more »