Training your dog is fundamental. It allows you to have the best possible relationship with your pet, and can help you avoid problems at home. 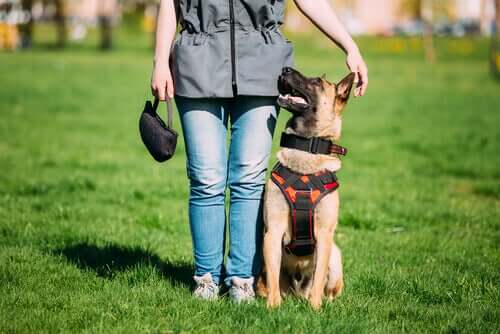 There are many similarities between well-trained dogs and conflict mediator dogs. You can train your dog so that it is able to interact with, and understand, its environment in greater detail. The most adept will even be able to provide important information about their owners. We know these as mediator dogs.

Therapists use animal-assisted therapy to treat patients with problems such as disabilities, Alzheimer’s disease and autism. Therapists also use AAT to aid in the rehabilitation of people suffering from addictions. In fact, thanks to the physical, psychological, and social benefits that they can have on humans, animals have been used in therapy since the beginning of the 20th century.

In the early years, therapists mainly used specially-trained horses. Today, however, dogs have become the animal of choice for alternative therapy.

It’s no secret that dogs play an important role in the lives of their owners. In fact, it’s becoming increasingly common for people to seek emotional and psychological refuge in their four-legged friends.

Many psychoanalysts have described the therapeutic effects dogs can have on people, and their ability to provide therapists with important information about their owners. In fact, in many cases, pets represent far more than just an emotional or physical aid.

For example, they don’t merely provide assistance for those with mobility problems; they can also tell therapists a lot about their owner’s well-being, their mood, as well as their home and family life.

Mediator dogs are especially useful for family or couple’s therapy, as they can highlight the emotional relationships between different family members. Just by being there, these dogs can help therapists pinpoint problem areas. It’s this ability to facilitate communication between therapist and patient that has led to these dogs being known as mediators.

For example, in families where relationships represent a source of insecurity, the pets themselves will show signs of insecurity, often showing aggressive behaviors. The information the dogs provide therapists gives them a greater understanding of the relationships, thus facilitating treatment.

Training your dog is essential, and helps ensure that it knows how to socialize properly. It also helps to prevent dangerous and aggressive behavior towards people and other dogs. However, it’s important to understand that training a dog is no easy task.

Training requires a great deal of time and dedication. Animals need to trust their trainer before they can start to learn from them properly. It’s a gradual process that is most effective when broken into short, regular sessions. Too tedious an activity can actually annoy animals, leading to resistance and rebellious behavior toward trainers.

As such, experts recommend rewarding animals for every correct behavior. This reward could take the form of a treat or toy, and serves as positive reinforcement, encouraging them to repeat the behavior in the future.

It’s best to get every family member involved in training sessions, even just for a short time. That way, the dog will learn to obey commands from lots of different people, rather than just one. However, simply creating a close bond built on love and trust can have a really positive impact on your dog’s training.

Training must start at an early age to ensure that any problem behavior can be modified.

Mediator dogs have a great understanding of social groups, and are often called “conflict mediators”. They understand and use canine language perfectly and rarely start fights, often intervening in an attempt to resolve conflict.

These animals have great control over their own actions. The aim of their interventions is not to injure other dogs – quite the opposite in fact. By stepping in, they hope to protect other members of the group from harm.

Mediator dogs are capable of making their own decisions, to such an extent that when faced with conflict, they don’t need or await permission from their owners before trying to help resolve the situation.

How people treat them has little impact on their self-esteem. They hardly ever hold a grudge, and can help resolve fights without letting it have an impact on their long-term relationship with members of their social group.

Every dog is different. Personality is dependent on breed, behavior, external stimuli, past experiences, and the people who look after them. Even members of the same litter can have very different natures (e.g. dominant, submissive, resourceful, curious, nervous…) These differences have led to the development of many different training methods.

The Benefits of Using Dogs in Animal-Assisted Therapy
Have you heard of using dogs in animal-assisted therapy? Learn here about how dogs are used, and the many social, emotional and physical benefits. Read more »
Link copied!
Interesting Articles
Sports and Exercise
Agility Competitions and Border Collies