How to Earn a Dog’s Respect

Treating a dog with "violent" verbal language is ineffective for earning their respect. So we recommend using positive reinforcement. Yes, you must be firm with your pet, but fair at the same time. 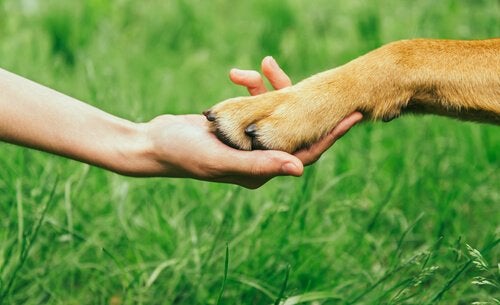 Dogs were the first animal to be domesticated. This means that the phylogenetic history of our favorite companions has been built on millennia of loyalty, fidelity and respect.

However, a dog is not a robot. They’re social animals that live in packs and they know who is the “alpha” is, which deserves all the other dogs’ respect and loyalty. Below, you can read some tips on earing your dog’s respect.

By no means use violent negative reinforcement

Educational theories have been telling us for half a century that the way to get a dog to learn is by using positive reinforcement, and that’s no different with training. The best way to get someone to learn is by rewarding them when they do it right.

If you shout at your dog, talk to them as if they understand complex phrases, hit them… The only thing they will understand is that there is chaos, stress, and something is wrong. They can even understand that the chain of command is wrong and this could be counterproductive to your objectives.

You will never earn a dog’s respect with violence.

When a dog comes to a new home, you must make it very clear which spaces they can enter, and which spaces they can’t. If you don’t want them to get on the sofa or sit by the table, you must be stern with them. You can do this by using direct commands, using a firm voice and no showing any doubt. For example, you can use the word “down!”

In the beginning, the dog will not understand what “down” or “get down” means, but with time, determination and without showing any fear, they will get off the couch. That is the moment to reward the behavior with a treat or a pat.

Don’t go to them, let them be the ones who come to you

Also, you should not reward them they’re anxious or aggressive. For example, if a puppy learns that every time they get nervous, you’ll calm them down by petting them when they grow up, they will see anxiety as a positive thing and adopt disruptive behaviors.

Therefore, whenever you are going to feed them or you want to play with or pet your dog in order to reward them, make them come to you. With this gesture, you will apply positive reinforcement to your pet every time they come to your call and, at the same time, will understand who is in charge.

Be the one who sets the rules

It’s natural that, after being locked up at home for several hours, your pet would want to be the first to go out to the street. When doing so, they will get carried away by the scents or they may want to explore is the most normal thing in the world. However, you should be the one who decides where to take them on the walk, and you should also be the one who sets the pace.

You must make sure that each time you begin to play with them, whether it being fetch or any other kind of game, you are the one who starts and finishes the activity. Also, you should avoid any aggression on their part, either it being way of barking or physically by biting.

In summary, if you teach them clear commands, appear to be firm and calm, or take advantage of positive reinforcement to reward good behavior, you will have the most loyal companion in the world by your side.