5 Differences Between Chimpanzees and Bonobos

Chimpanzees and bonobos are very similar species but are different in more ways than you may think. Here we'll show you the 5 main differences between these two primates. 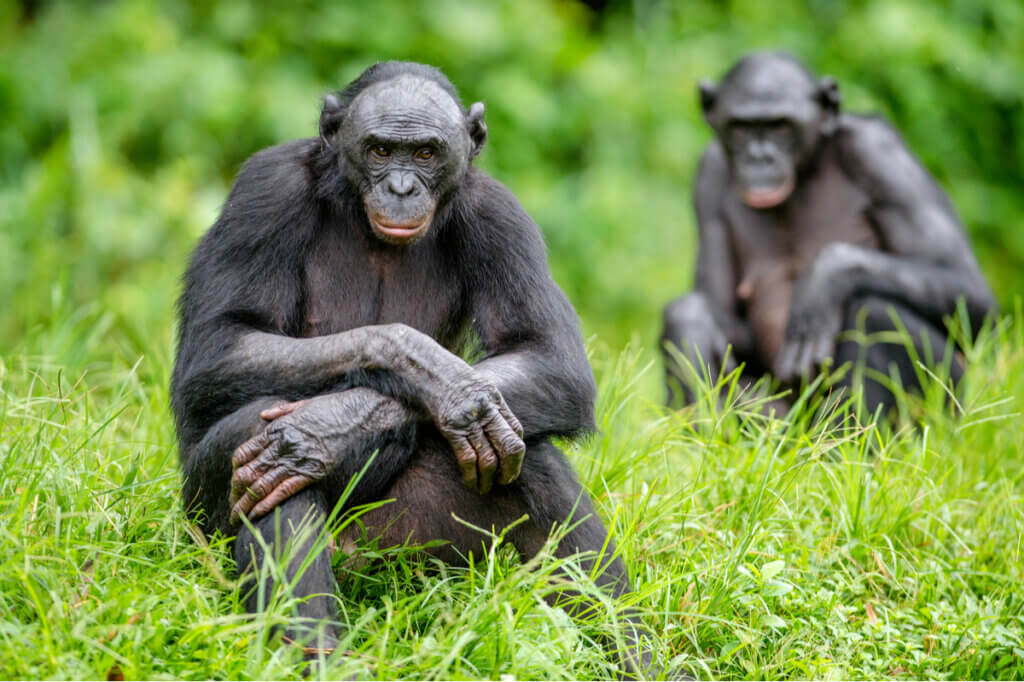 Primates are the animals closest to humans in many ways. However, with so many genera, we find more variety than in our own species. There are more than a hundred different species and among them are chimpanzees and bonobos, with whom we share a genetic code. These, according to scientists, are our closest living relatives.

Chimpanzees and bonobos belong to the same genus, Pan, and inhabit the regions of central and western Africa, separated by the Congo River. They are very similar species, in fact they’ve crossed twice along their evolutionary history.

However, they have certain physical features that set them apart from one another. What’s more, they have different behavior and conduct. Below, we’ll show you the most essential differences between them.

1. A river separates them

The range of both primates is well defined: Chimpanzees live on the north bank of the Congo River, while bonobos live on the south side. Experts believe that the formation of this geographic feature was the key factor that initiated the division of the species. In other words, it produced the reproductive isolation of the specimens on both sides of the river.

Chimpanzees cover a wider region of the African map. In fact, they inhabit up to 21 different countries of the continent from Senegal in the west to Tanzania in the east. Therefore, they live in very varied ecosystems: Tropical forests, mountain forests, swamps, and savannas.

This great diversity of habitats indicates their capacity to adapt. Their habitat ranges from the most luxuriant and humid areas to the aridest, with sudden temperature and humidity changes throughout the year and long periods of drought. Bonobos, on the other hand, have a more restricted distribution and it’s uncommon to see them outside their natural habitat.

2. Bonobos are smaller and thinner

Bonobos are smaller than chimpanzees. What’s more, their limbs are longer and more slender, not as muscular as those of their relatives. The young are born with a black face, unlike a chimpanzee’s, which is pink and gradually darkens.

Although both primate species can stand up and walk upright, it’s bonobos that do so most often when moving around. As we can see, not only is their physiology different, but they also display different behavior when moving.

3. Chimpanzees are aggressive and territorial

Both species live in social groups. However, chimpanzees are much more aggressive than bonobos, as they’re great defenders of their territory. Wars between different chimpanzee tribes are common. On the other hand, bonobos are peaceful and there is usually no fighting for territory between groups.

4. The matriarchal society of the bonobos

Unlike many animal species, bonobos live in female-led communities. Their social organization is very different from chimpanzee social groups, where different social statuses exist and an alpha male dominates all others, both males and females.

In bonobo groups, the influence of females is so great that the mothers even help their children to procreate (only the males). As a result, these males are up to three times more likely to mate.

Mothers accompany their offspring to the places where they can find fertile females. Then, they intervene if their offspring have competitors, and may even chase the rival males if necessary.

Male bonobo offspring remain with their mother until they are adults. However, in chimpanzees, this is not the case. Rather, males usually wean at the age of four or five and are independent by the age of nine.

The mother’s role is key to the survival of the offspring. Chimpanzees always maintain a maternal bond, but the relationship is different compared to that of bonobos. In addition, young males can form coalitions with each other and challenge the alpha male in their group.

Without a doubt, one of the characteristics that makes the peaceful bonobos famous and differentiates them from other primates is the use of sex. Sexual relations have a very important nuance in bonobo communities. That’s because it’s more of a social or communicative interaction than a means of reproduction.

In bonobos, there are copulations among members of the different sexes and as well as members of the same sex. In that sense, it’s not uncommon to see two males or two bonobo females copulating. What’s more, they exhibit a wide repertoire of sexual activities such as kissing, oral sex, rubbing of the genitals, and many others.

Chimpanzees and bonobos are two very similar primate species. However, the differences, especially in behavior, are very striking. Therefore, these distant relatives are two unique species that we must protect in order to ensure their survival.

Chimpanzee Culture is Disappearing
Have you ever heard of animal culture? Well, they have cultures and chimpanzee culture is in danger of disappearing. We'll take a closer look! Read more »
Link copied!
Interesting Articles
Mammals
What Elephants Eat in Captivity